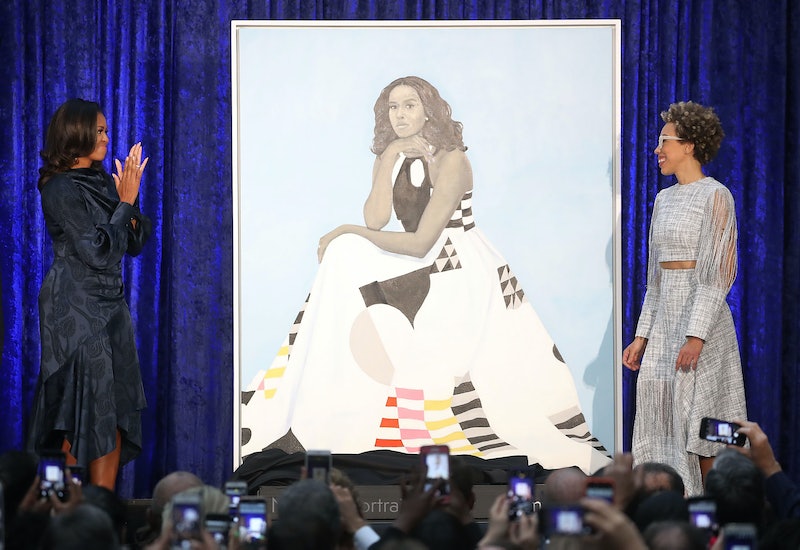 When her portrait went on display at the Smithsonian Institution in Washington D.C., the former first lady predicted that it would have an impact on children of color, who don't often "see an image of someone who looks like them hanging on the wall" at a place like the Smithsonian. So far, it looks like she was right: Photos of a young black girl looking at Michelle Obama's portrait in awe went viral on Friday, with plenty of people on social media sharing and talking about it.

"Donna Hines & I made a pilgrimage today and we were delighted to wait in line behind this fellow art lover & hopeful patriot," wrote Ben Hines, the man who took and posted one of the photos, on Facebook. The picture features a young girl — later identified as two-year-old Parker Curry — looking up at Obama's portrait with her mouth agape and an unmistakable look of admiration on her face.

The image spread like wildfire on Twitter as well, with BuzzFeed reporter Julia Reinstein called it "the cutest thing i've ever seen in my entire life." Amy Sherald, the artist who painted the portrait, reposted the photo of Curry on Instagram and remarked that she's "feeling all the feels."

Jessica, Curry's mother, told BuzzFeed that her daughter was "fascinated" by the Obama portrait. "I was trying to get her to turn around so I could take a picture, but she wouldn't cooperate," Jessica said. "She just wanted to stare at it. She was fascinated."

The young girl's reaction to the photo brings to mind comments Obama made in February, when the portraits of her and her husband were unveiled at the Smithsonian's National Portrait Gallery:

I’m also thinking about all of the young people, particularly girls and girls of color, who, in years ahead, will come to this place and they will look up and they will see an image of someone who looks like them hanging on the wall of this great American institution. I know the kind of impact that will have on their lives because I was one of those girls and, when I think about those future generations and generations past, I think, again, wow. Wow, what an incredible journey we are on together in this country. We have come so far.

"It's hard to describe in words," Vines' mother, Donna, told BuzzFeed of the moment she witnessed. "She had such wonder on her face and her entire body just stopped as she looked at her, and she had this wonder that was silent and yet seemed to be saying something very big at the same time."

When Sherald posted the photo on Instagram, she added the hashtag #representationmatters, and recounted a long story about the first time she saw a black person in a painting at a museum, and how that experience changed her.

"I don't remember a lot about my childhood, but I do have a few emotional memories etched into my mind forever and seeing that painting of a man that looked like he could be my father stopped me dead in my tracks," Sherald wrote. "This was my first time seeing real paintings that weren't in a book and also weren't painted in another century. I didn't realize that none of them had me in them until I saw that painting of Bo's. I knew I wanted to be an artist already, but seeing that painting made me realize that I could."

That, in a nutshell, sums up the enormous historical significance of the Obamas' tenure in the White House. When America elected a black president, it sent the message to millions of children of color that they, too, could grow up to be president. The first lady's portrait at the Smithsonian has only been up for two weeks, but it appears to have already inspired one young girl in the same way.