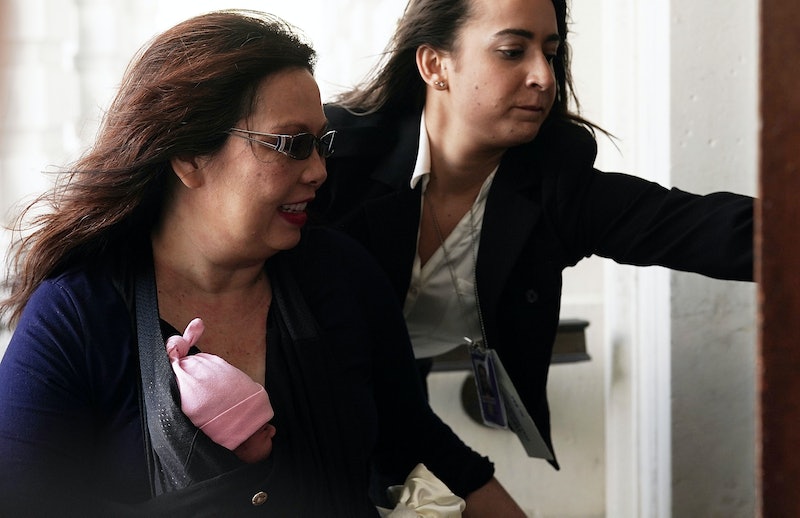 If you're getting tired of only seeing bad news everywhere you look, then a photo of Senator Tammy Duckworth at an immigration protest with her baby is assuredly the silver lining of the week, or maybe the year. With her baby strapped to her chest, Duckworth joined in on the protest, which was staged by female activists in a Capitol Hill Senate building, according to CNN, in direct protest to the Trump administration's zero-tolerance immigration policy.

To CNN, Duckworth later said, "I wanted to show my support for the folks here today." She added, "I could only imagine what it would be like to have my daughter — my breastfeeding child — ripped away from me the way some of these other moms' babies have been."

Duckworth had her second child in April, and was notably (and shockingly) the first sitting senator to give birth while serving in office. So it was fitting that Duckworth lent her support to the activists who were protesting the inhumane policies that have separated families from children, even women who were breastfeeding their children at the time.

According to CNN, there were more than 1,000 female activists who marched through Washington on Thursday afternoon, with the U.S. Capitol Police arresting 575 of those activists with "unlawful demonstration," though all of the arrests were peaceful.

The reason for the protest likely had to do with the fact that Congress is set to break for a week-long recess, without having passed any legislation as a solution for the growing crisis at the United States-Mexico border.

CNN notes that the House of Representatives failed to pass legislation on Wednesday which would have addressed border wall funding and a pathway to citizenship for recipients of DACA. Instead, Trump said earlier in the week via an executive order that his administration was seeking extended authority to detain families (this time together) until the end of their proceedings.

In solidarity with the conditions that migrant families and individuals face at detention facilities, the female activists reportedly sat on the floor of the Senate building wrapped in emergency blankets.

The protest was attended by other senators as well, including Senator Jeff Merkley (D-OR), Senator Kirsten Gillibrand (D-NY), and Senator Ed Markey (D-MA). At one point, Markey told The Daily Beast, “We have responsibilities under international treaties to treat people with respect when they seek asylum. We have national laws that require it."

At one point, Duckworth wheeled herself forward in a wheelchair with her baby to immense cheering from the crowd, though she never gave a formal speech.

As the daughter of an immigrant and a Daughter of the American Revolution, Senator Duckworth is an advocate for comprehensive, fair, humane and just immigration reform because she believes that America is at its best when we embrace our nation’s rich immigrant heritage. She understands that immigrants strengthen our economy and our communities by working hard every day to build a better life for themselves and their families and is working to advance immigration policies that reflect that reality.

As the female activists marched on Washington, they chanted, "We will not obey!" over and over again, as well as "Abolish ICE!", according to The Washington Post.

At one point, Duckworth said to The Washington Post, “I join them in calling on the Trump administration to reunite these families and give these kids back to their parents,” Duckworth said. “On my side of things, I ask my colleagues, let’s pass, finally, sensible immigration reform.”