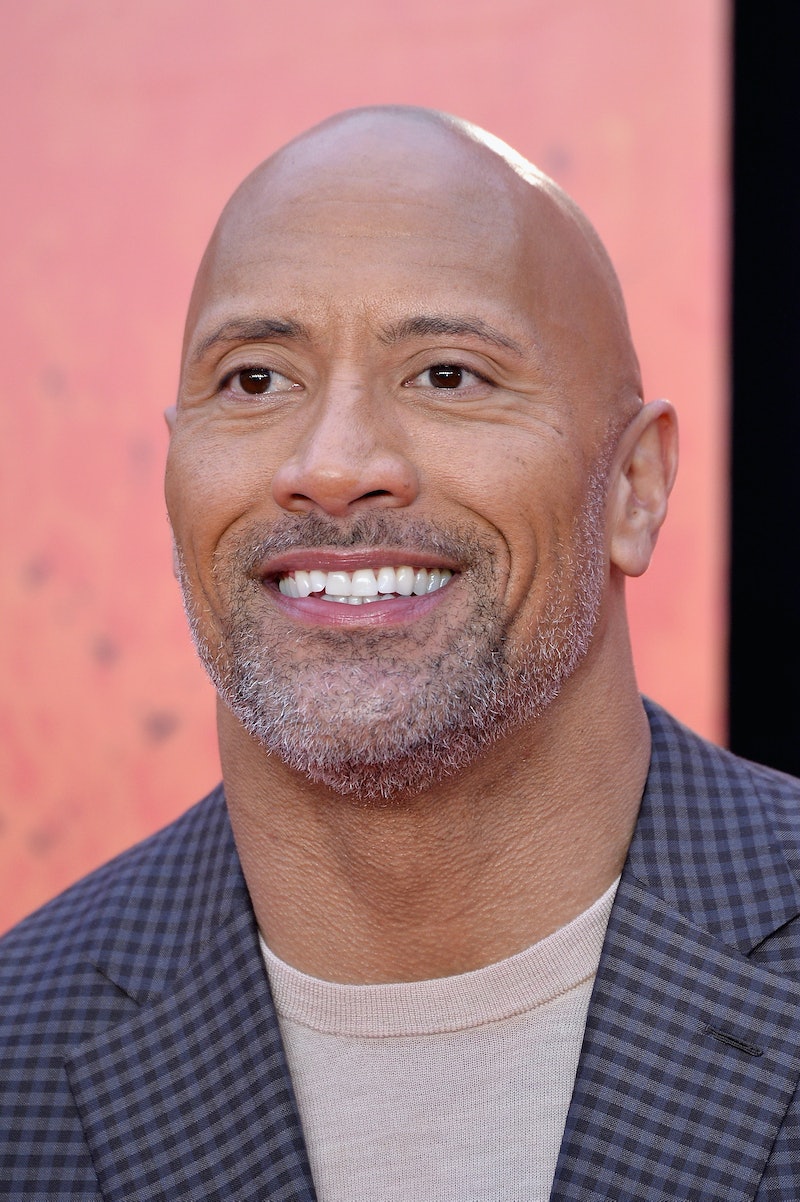 On Monday, Dwayne Johnson welcomed his third daughter, Tiana Gia Johnson. And The Rock shared a photo of his baby daughter along with an emotional message that is all about celebrating women and childbirth on his Instagram account. The actor posted a photo of himself at the hospital with his tiny newborn daughter, and put a long note in the caption to welcome her into the world. He's been known to post long, empowering messages for his family and friends on social media, but his response to meeting his new baby was especially sweet.

The message was dedicated to his new daughter, but it also included a loving note for his longtime partner, Lauren Hashian. "Blessed and proud to bring another strong girl into this world. Tiana Gia Johnson came into this world like a force of nature and Mama Lauren Hashian labored and delivered like a true rockstar," he wrote. "I was raised and surrounded by strong, loving women all my life, but after participating in baby Tia’s delivery, it’s hard to express the new level of love, respect and admiration I have for Laure Hashian and all mamas and women out there."

The actor was also sure to emphasize how important it was to be supporting his girlfriend during this important moment, and how meaningful it was to be there for the birth. "Word to the wise gentlemen, it’s critical to be by your lady’s head when she’s delivering, being as supportive as you can, holding hands, holding legs, whatever you can do," he wrote. "But, if you really want to understand the single most powerful and primal moment life will ever offer - watch your child being born. Its [sic] a life changer and the respect and admiration you have for a woman, will forever be boundless."

His post about his daughter wasn't the first time The Rock has been outspoken about his love and respect for the women in his life. He often shares positive messages for his two other daughters — Jasmine Lia, who is 2 years old, and Simone Alexandria, 16. On International Women's Day, he shared a picture of his daughter Jasmine that included special note for women everywhere.

"Girl power. To every woman out there ‘round the world - all ages and races - I proudly stand by your side to always honor, protect and respect," he wrote. "Especially, the loves of my life at home. Now if I can just get Jazzy to say the daddy is the most handsome, brilliant, sexiest man alive part, then we all gonna be cool."

Last year, Simone also got an inspiring social media message from her dad. He shared a throwback photo on her 16th birthday, writing: "Happy Birthday honey! I'm so proud of the awesome young woman you've become," he wrote. "Keep your eyes on that prize, keep working hard and I got your back every step of the way. Now go have fun!"

Johnson is pretty busy these days, and is currently promoting his most recent action film, Rampage. He also starred in Jumanji 2 and in the new season of the HBO series Ballers, so it's a major career moment for the actor and potential future presidential candidate. Luckily, it seems that he has a break to spend time with his newborn daughter. In the Instagram note, he wrote: "Your crazy dad has many responsibilities and wears many hats in this big ol’ world, but being your dad will always be the one I’m most proud to wear." It's clear that family is super important to the star, and in many of the posts dedicated to his daughters and partner, he promises to always put them first.

His post for baby Tiana was pretty heartfelt, but he wouldn't be The Rock if he didn't end on a lighter note. "Oh and one more thing," he wrote at the end of the emotional post. "You’re gonna love rollin’ in daddy’s pick up truck." It seems like Tiana Gia Johnson has a pretty great dad!