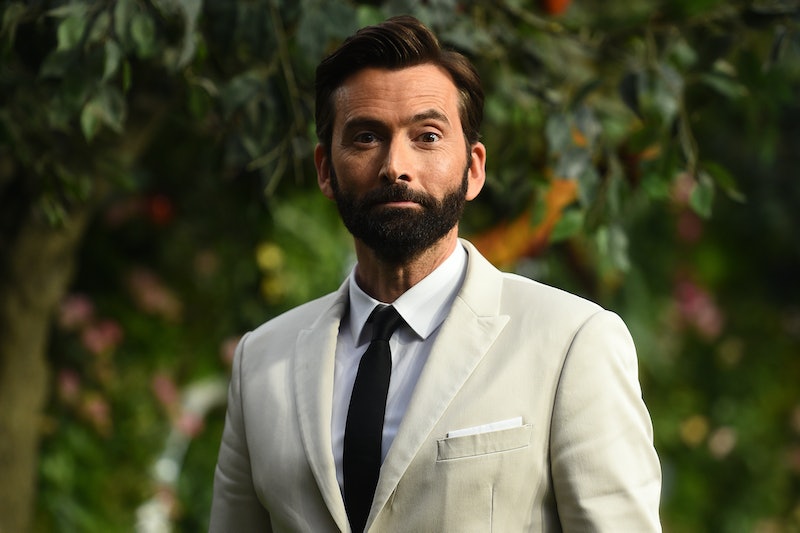 Famous offspring receive just as, if not more, attention than their celebrity parents. But one couple has kept their newest family addition relatively private until now. The world may still not know the sex or name of David and Georgia Tennant's fifth child, but fans do now know that the youngest Tennant is already into Doctor Who.

Georgia revealed on Instagram a photo of the couple's baby watching what appears to be one of the saddest episodes in Doctor Who history. The caption? It simply read: "Indoctorination."

Of course, it didn't take long for fans to go wild. But many were distressed that the baby would be watching the heartbreaking demise of the Doctor and Rose Tyler's relationship. As many fans pointed out, the episode shown on Tennant's TV looks like the finale of season two.

Aptly titled "Doomsday," this episode — and the previous one — marked the first time the Daleks and Cybermen appeared together on screen. Their attempt to take over the world obviously didn't happen, but the result of Earth's saving saw Rose (played by Billie Piper) sucked into a parallel universe. Unable to travel between universes, the Doctor appears for just a few moments to try and say goodbye. But his message is abruptly cut off. *Tries not to cry*

On a happier note, David said he would be up for reprising the role if asked. Speaking to the Radio Times back in August, the 48-year-old — who played the titular role between 2005 and 2010 — admitted an anniversary special "would be fun to do." The sci-fi series will celebrate its 60th anniversary in 2023.

“I suppose the opportunity has historically been there for Doctors to return to an extent,” he added. “There would come a point where I wouldn’t be able to get away with it. I wouldn’t be able to fit in the suit, or get my hair to stand up at the end like I used to." He even joked: “The more I speculate, the more I’ll end up getting myself in trouble…”

However, the actor has also been open about the level of attention the Doctor Who gig brought him. “The way you imagine it’s going to be is not the way it is at all. It’s much more exposing, and the imaginative leap you’ve had that it will give you status or make you invulnerable is all wrong," Tennant explained to the Sunday Times in May.

This hasn't stopped one of Tennant's children from following in his dad's footsteps. The couple's oldest son, 17-year-old Ty, made his acting debut earlier this year on Casualty and stars in the most recent War of the Worlds adaptation. Who knows what baby Tennant will grow up to be?