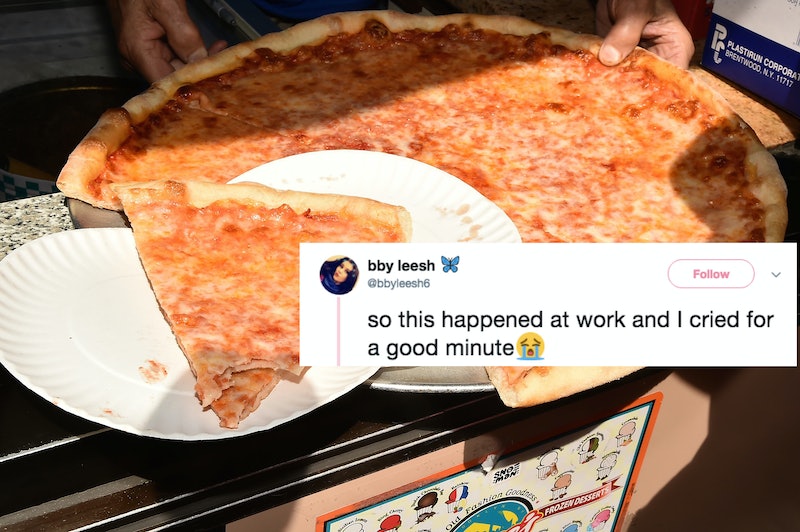 Sometimes, it's better to write something down than to say it aloud. And sometimes, it's better to have someone else write it on the inside of a pizza box for you. As shown in July 6 a tweet that went viral, someone announced their pregnancy inside a pizza box, and the result was actually quite beautiful and topped with pepperoni, green chile, and what looks like the perfect amount of cheese. The pregnancy announcement looks pretty nice, too.

The story was shared by Twitter user @bbyleesh6, who tweeted, "so this happened at work and I cried for a good minute" along with a sobbing emoji and two photos. The first photo shows the note that the pizza place received requesting that a pregnancy announcement be written on the inside of a box. The note starts, "Hi. Can you please do this for my boyfriend before you call our order?" It then asks that someone write "boldly" in "legible or pretty handwriting" on the inside of the box: "The butterflies in my tummy have turned into 2 tiny feet. I'm pregnant." The second photo shows the final result.

The request for the writing to be both bold and "legible" and/or "pretty" sounds a little demanding, so thankfully, the person who made the request was sure to express their gratitude. "Thank you so much!! And thanks for being part of the announcement," they wrote. Anyway, being asked to help with a pregnancy announcement is way better than most of the ridiculous things that are requested of people in the food industry.

And the employees at Dion's Pizza didn't disappoint. Rather than just writing the message all sloppy with a ballpoint pen, manager @Cheyheyenne went all out with the calligraphy. It is bold, it is legible, is it pretty. She even drew a butterfly and the "two tiny feet." (And she took it upon herself to spell out the number "two" even though that wasn't requested in the original note — a good call.)

It's unclear how the pregnancy announcement went over since the name of the person who made the request is omitted from the note and they don't seem to have commented on the Twitter thread, but it had to be quite a shock. Imagine thinking you were just picking up a pizza and then suddenly finding out you're becoming a parent. Any pregnancy reveal is going to be a surprise, but going into a pizza box for a slice and coming out with the news that you have to raise a human for 18 years is really something else. Hopefully, the soon-to-be dad was excited and the couple celebrated by eating that delicious looking pizza.

While we don't know anything about the parents, the two Dion's employees have cleared up a few things on Twitter. @bbyleesh6 noted that the store where she works doesn't deliver, so there was no chance of it going to the wrong person. She also passionately explained that the green stuff on the pizza is chile after someone suggested it was mold. As for calligrapher/manager @Cheyheyenne, she said that she does calligraphy often so people should hit her up for work.

@bbyleesh6's original tweet has 64K likes and 18K retweets at the time of this post's publication, so, clearly, the cute and tasty announcement has resonated with people. Even if you don't have a pregnancy to announce, it's the sort of thing that makes you want to announce your own news via pizza box. Asking someone to be your bridesmaid? Pizza box. Telling your parents you're dropping out of school? Pizza box. Never having kids and confirming that news to yourself? Pizza box. The possibilities are endless.

Congrats to the (probably) very happy couple, who hopefully also had cold pizza for breakfast.

More like this
The Best Memes & Tweets About The Discontinuation Of The Choco Taco
By Alexis Morillo
I Tried The $20 TikTok Viral Oishii Strawberries — Here's What I Thought
By Sophie Hanson
On TikTok, A ‘Snackle Box’ Is The Best Way To Pack Charcuterie On-The-Go
By Meguire Hennes
TikTok Is In Its Elle Woods Era
By Meguire Hennes
Get Even More From Bustle — Sign Up For The Newsletter