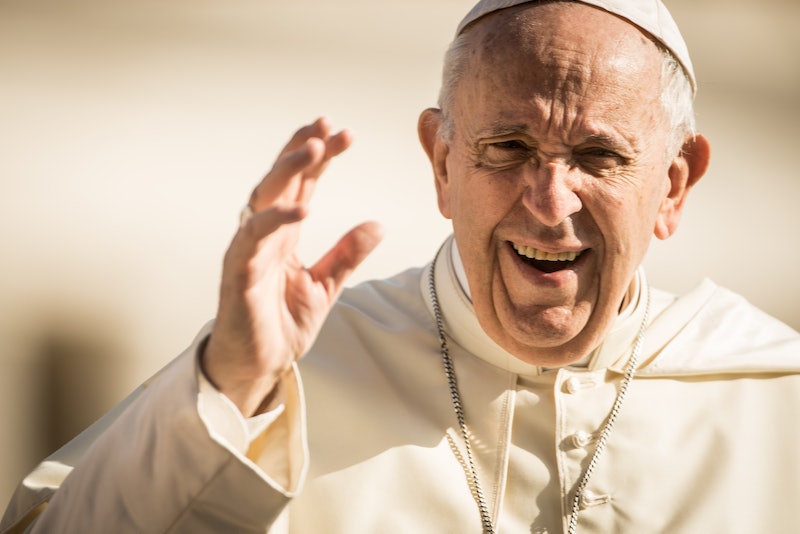 In an excerpt of a new book released on Saturday in Italy, Pope Francis made the church's stance on gay priests clear: they should not, in his opinion, be accepted into the Catholic clergy. "In our societies it even seems that homosexuality is fashionable and that mentality, in some way, also influences the life of the church," the Pope said in The Strength of a Vocation, according to The Guardian.

The Strength of Vocation is by Father Fernando Prado and based upon hours of interviews Prado did with the pontiff about the challenges facing clergy members. The book is set to be released in full on Monday in 10 languages, the BBC reported. (The excerpt was originally published by Italian news daily Corriere della Sera's website.)

During one interview in particular, the Pope said homosexuality among clergy members was a concern for him. "The issue of homosexuality is a very serious issue that must be adequately discerned from the beginning with the candidates," Francis said of potential clergy members, according to The Guardian. "This is something I am concerned about, because perhaps at one time it did not receive much attention."

He added that it's possible that priests could come out later in life — and that the church should take that into account. "It can happen that at the time perhaps they didn't exhibit, but later on it comes out," the pontiff said.

Because the Pope doesn't believe there's a place for LGBT priests, he urged these priests to leave the priesthood. "It's better for them to leave the ministry or the consecrated life rather than to live a double life," he said, according to The Guardian.

He went on to urge LGBT clergy to be "impeccably responsible" in their conduct. We "have to urge homosexual priests, and men and women religious, to live celibacy with integrity, and above all, that they be impeccably responsible, trying to never scandalise either their communities or the faithful holy people of God," the pontiff said, as The Guardian noted.

The pope's position on gay people — clergy or otherwise — isn't new for the church. However, in July 2013, the Catholic leader made headlines with a comment that some interpreted as a softening of the church's views on gay people. "If someone is gay and he searches for the Lord and has good will, who am I to judge?" he asked reporters in Italian during a press conference.

Additionally, ABC News reported that the Pope said LGBT Catholics are an important part of the church in this new book. "They are persons who will live in the service of the church, of the Christian community, of the people of God. Let's never forget this perspective," he explained. His comments on gay clergy, however, take on a much different tone.

It remains to be seen how the Pope's comments will factor into the pontiff's image as a progressive or "The Cool Pope." As a columnist for The Independent pointed out, the pontiff's tepid acceptance of gay people, but not "homosexual acts", is pretty standard belief in the church.