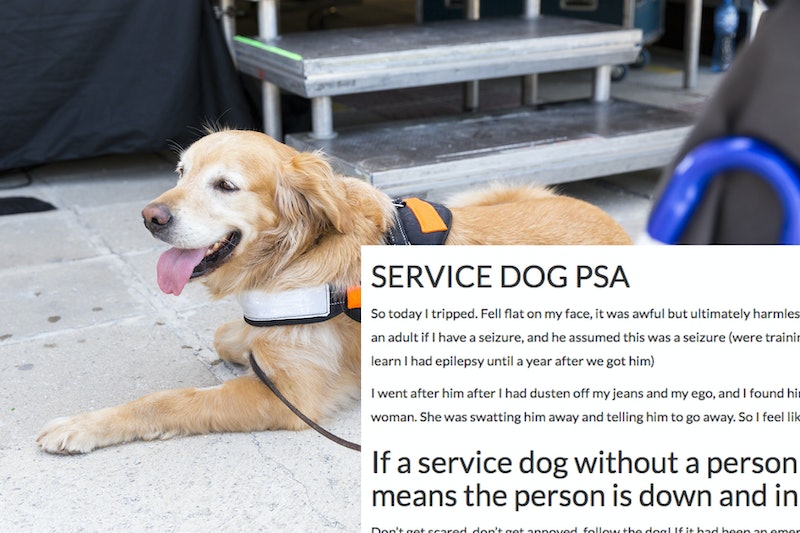 Most dog lovers are cognizant of the etiquette one must have around service dogs. Where you might ask a typical dog's owner if you can approach the pooch, you'll want to abstain with service dogs. While regular dogs are out on walks for leisurely purposes, service dogs, when accompanying their owners, are doing a specific, important job. But have you ever spotted a service dog without an owner? Would you know how to handle the situation? It's not something you think about often. But how you handle seeing a service dog approach you without its owner could be a sign of a very serious situation.

In a Tumblr post, user lumpatronics describes a recent situation they were in with their service dog. They describe falling on their face. While the fall was "awful," they also described it as "ultimately harmless." But their service dog thought it was a seizure. He ran off, and tried to get the attention of a woman who, in turn, reacted with annoyance — leading Lumpatronics to pen a now viral post explaining why that is the exact wrong reaction. In fact, they state in the post, in bold lettering:

If a service dog without a person approaches you, it means the person is down and in need of help.

"Don’t get scared, don’t get annoyed, follow the dog! If it had been an emergency situation, I could have vomited and choked, I could have hit my head, I could have had so many things happen to me. We’re going to update his training so if the first person doesn’t cooperate, he moves on, but seriously guys. If what’s-his-face could understand that lassie wanted him to go to the well, you can figure out that a dog in a vest proclaiming it a service dog wants you to follow him."

The full post is available to read on Tumblr here.

Service dogs are defined under the Americans with Disabilities Act as "dogs that are individually trained to do work or perform tasks for people with disabilities." These include, but are not limited to, "...guiding people who are blind, alerting people who are deaf, pulling a wheelchair, alerting and protecting a person who is having a seizure, reminding a person with mental illness to take prescribed medications, calming a person with Post Traumatic Stress Disorder (PTSD) during an anxiety attack, or performing other duties." The American Humane Association reports roughly 20,000 service dogs living and working in the United States currently.

Further, Under the Americans with Disabilities act, "State and local governments, businesses, and nonprofit organizations," or other properties that serve the public generally must allow service dogs to be on the premises.

Lumpatronics' original Tumblr post has since viral, having become a Twitter moment, and making its way to Reddit. It was posted under the r/LifeProTips section of the website, and received almost 54,000 "upvotes" in 24 hours. While much of the feedback praised the PSA, a number of users brought up a factor that complicates things: illegitimate service dogs.

So, what's the takeaway? Is this good advice considering that some service dogs may be illegitimate?

Just-a-traveler, a moderator for r/LifeProTips offered some words of wisdom: "You should approach the dog with caution and don't go lunging for tags. Far too many folks are buying the service vests online and slapping them on Rufus, and Rufus would as soon bite your hand. Rufus, not being trained, will tend to escape."

Until stricter laws are enacted to prevent fake credentialing of service dogs, it is an imperfect situation. But, Lumpatronics makes an incredibly important point. So, if you find yourself in this situation and you feel safe following the beckoning pooch, do it — or at the very least, find someone else to follow it with you, or let a local authority know. You might just end up saving the day.