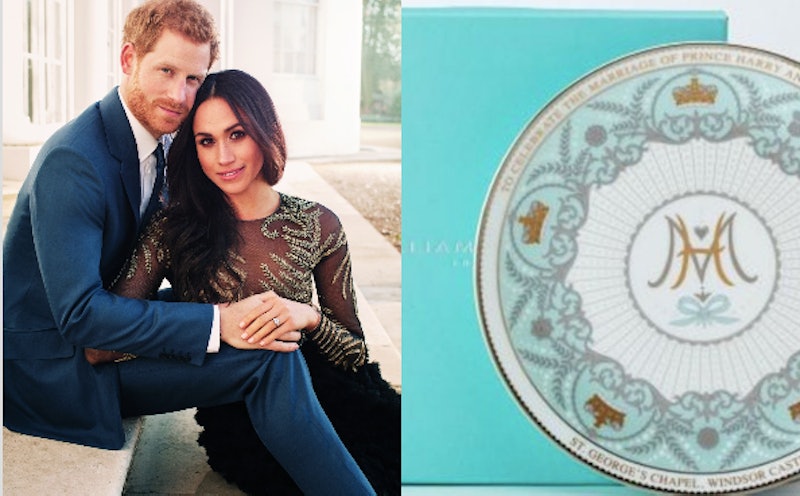 Manufacturers have already started flooding the zone with Prince Harry and Meghan Markle memorabilia ahead of this spring's royal wedding, busting out commemorative mugs, plates, teapots, tea blends, dresses, pillows, and other goodies as dictated by tradition dating all the way back to the dawn of capitalism. But while a good chunk of this merch is more akin to the stuff you'd bypass at an airport newsstand, a homegoods company just released a line of Prince Harry and Meghan Markle royal wedding china that's classy AF, not that Meghan deserves any less!

William Edwards, a high-end British luxury manufacturer of bone china, announced this week that they're debuting a new, limited edition line of commemorative china celebrating the upcoming royal nuptials. Dubbed "The Royal Wedding Collection" (duh), the line includes coasters, mugs, wedding plates, teacups and saucers, and, my personal favorite, a "hinged pill box," which looks way too fancy for me to use to store my Advil, but who cares! The company says each item has been "skillfully hand-decorated with a delicate pale pastel eau de nil mica and embellished with both platinum and 22 carat gold," and they're decorated in a rather elegant paint mix of mint green, white, and gold. Honestly, I love them.

Collectable royal wedding china may seem kind of extreme — the William Edwards collection, for instance, is priced at about $21 to $63 per piece — but royal wedding souvenirs go waaaaay back. In December, the New York Times dug into the history and economics of royal wedding collectables, finding wedding teapots dating all the way to Queen Victoria's wedding in 1840. According to the Times, the royal wedding is supposed to boost Britain's economy by about $700 million (£500 million, in pounds), and though the majority of that is expected to come from visiting tourists, about one-tenth of the influx will be from merchandise.

And Bone china apparently makes up a good bulk of the merch. China manufacturers Royal Crown Derby say they'll be selling even more expensive goods than William Edwards, with a £75 heart-shaped tray and a £150 octagonal plate on tap. The company has been making royal memorabilia since the Victorian era. "I think they just look for an excuse to be able to do it, every time there’s a birth, wedding, engagement, anniversary, anything," collector Jan Hugo told the Times.

Though it's unclear whether we'll be getting the William Edwards pillbox on this side of the pond, some companies say they hope to get royal wedding memorabilia into stores in the United States, since Meghan Markle is blessedly one of ours. But perhaps even better than getting "Meghan <3's Harry" teapots in Bloomingdales would be getting some of the odder royal wedding goods that have popped up on the market in years past. When Kate Middleton married Prince William in 2011, there was a ton of strange stuff for sale, including, but not limited to: 1) a knockoff version of Kate's ring, 2) life-size cutouts of Kate and Will, 3) themed barf bags, 4) condoms, and 5) their faces baked into a Papa John's pizza. But whyyyyyy???

The weird Harry & Meghan memorabilia does seem to be streaming in already. I've seen some pretty standard fare, like placemats, mugs, and t-shirts, but according to Town & Country, people are already selling commemorative flags, life-sized cutouts, and paper dolls. (Thankfully, a Google search for commemorative condoms has thus far come up empty.)

Of course, while the royal wedding merch may seem odd to us, when Mindy Kaling had her baby I strongly considered knitting it a sweater, so we all have our things, I guess.

More like this
This 'One Tree Hill' Wardrobe Error Is Going Viral On TikTok
By Brad Witter
These Kylie Jenner's Lion Head Dress Memes Have Me On The Floor
By Allie Fasanella
Pret & Costa’s Coffee Is The Strongest On The High Street, According To Which?
By Sam Ramsden
Ashamed Of Your Screen Time Stats? Here's How To Change That
By Alexis Morillo
Get Even More From Bustle — Sign Up For The Newsletter
From hair trends to relationship advice, our daily newsletter has everything you need to sound like a person who’s on TikTok, even if you aren’t.