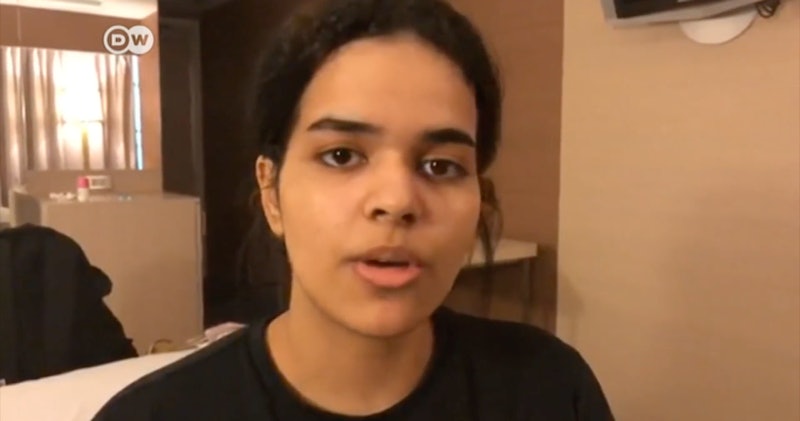 On Tuesday, the Saudi teenager who fled her family out of fear for her life was begging the international community for help on Twitter, asking Western countries for protection with the hashtag #saverahaf. By the next day, everything had changed for the better. Australian officials said Wednesday that the United Nations refugee agency (UNHCR) had granted Rahaf Mohammed Alqunun refugee status, and that she may be headed down under for refugee settlement.

Alqunun's Twitter account seemed to acknowledge the most recent development with a "happy" filtered selfie and a post that read, "Don’t let anyone break your wings, you’re free. fight and get your RIGHTS!"

The settlement in Australia, though, is not a given. UNHCR has referred her to Australia, but it's up to the country to move forward. Australia's Department of Home Affairs said in a statement to the Associated Press that it would "consider this referral in the usual way, as it does with all UNHCR referrals."

The next step after the decision by the United Nations refugee agency, according to The New York Times, is for her to be placed with a country. And speed is of the utmost importance, experts say. "What’s important is to get her safe, so Australia really needs to move quickly to get her out of here," Phil Robertson, the deputy Asia director for Human Rights Watch, told the paper.

Australian media reported that the 18-year-old would likely be granted a humanitarian visa if everything with UNHCR proceeded as normal. Alqunun will be subject to security and character checks that the Australian government typically applies in such cases, ABC News Australia reported. She had previously been granted a tourist visa by the country, and had planned to continue on to Australia from Thailand before she was stopped at the Bangkok airport.

The turn of events was striking, even to those who work in human rights. "Amazingly, Rahaf’s original hope may come true after all now," Robertson told The Times. "Just two days ago, she was barricaded in a hotel room fighting for her life, and now we see this wonderful and astonishing turn of events."

Robertson noted on Twitter that Australian Foreign Minister Marise Payne is headed to Thailand on Thursday. Payne will be there to sign an Australia-Thailand Memorandum of Understanding on Cyber and Digital Cooperation. She also plans to advocate for the safe return to Australia of another refugee, footballer Hakeem Alaraibi. Robertson asked, "Will she take #Rahaf back with her?"

Thailand's immigration police chief Maj. Gen. Surachate Hakparn told the AP that Alqunun's father and brother arrived in Thailand on Tuesday, but that she refused to meet with them.

"My father just arrived as I heard witch worried and scared me a lot and I want to go to another country that I seek asylum in," Alqunun tweeted Tuesday. She also acknowledged that she had been given back her passport, which was confiscated upon her arrival in the country.

Under Saudi law, all women must have a male guardian's permission in order to get a passport, travel abroad, marry, and even receive elective medical attention, the AP reports. Women can be jailed for failing to follow these so-called "obedience laws."