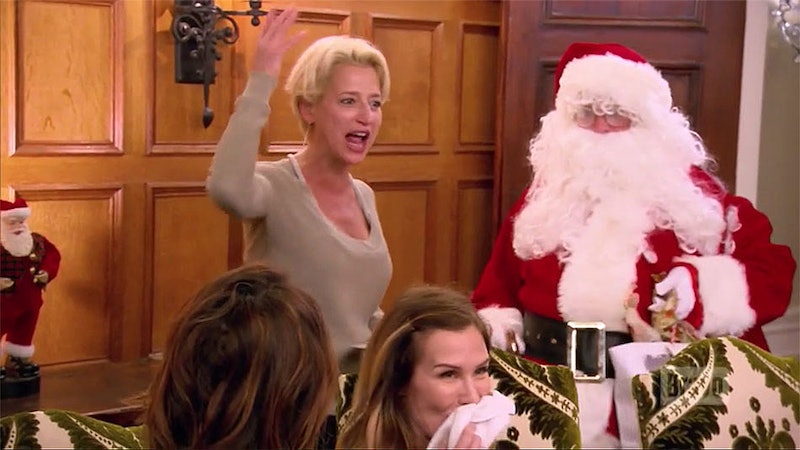 Almost no one celebrates a holiday to the extreme that the women on Real Housewives do, but two very devoted viewers created the best decoration to get on their level. Two Bravo superfans made a Real Housewives themed Christmas tree with ornaments of each Housewives' face. They even placed them in order of their favorites, from top to bottom. The ornaments include photos of every single Housewife ever, including the cast members on international shows. This means that there are over 150 Housewives decorating the tree.

Bryce Carson and his boyfriend, Matthew Kluge, came up with this brilliant idea of turning the Real Housewives' headshots into festive ornaments and hanging them from favorite to least favorite, meaning this appeals to both Housewives and fans alike. (Well, most likely the Housewives at the lower end of the tree would not be pleased to be there, but they probably have worse problems to deal with.)

Explaining the reasoning behind their rankings (which are listed below), Carson tells Bustle via email, "One criteria of who is a good Housewife was their willingness to open up and show off every aspect of her life. Someone like Shannon Beador is so highly ranked because she is the most open and real Housewife there is. There’s nothing that she’s hiding and she’s always willing to play ball with nothing off limits."

Surprisingly, Carson and Kluge are not huge fans of Kyle Richards who has been a part of Real Housewives of Beverly Hills since its first season. Hear them out, though. Carson says, "Someone like Kyle Richards is at the bottom because of her forced storylines and tendency to handle/start drama off camera."

The Richmond, Virginia resident adds, "And others just obviously belong at the bottom like the twins from RHONJ." Considering that they were only around for one season (and it wasn't even a good one) that is a sentiment that viewers within the Real Housewives fandom can agree with.

In the caption of his Instagram of the tree (and you can click through the Instagram above for more pics), Carson wrote, "We’ve ranked them from naughty to nice with the Queen of Christmas at the top @dorindamedley."

Of course, Real Housewives of New York City star Dorinda Medley is on top of the tree as the angel. Everyone who watches RHONY or follows Medley on social media knows how much she loves Christmas. No one could ever forget how she she "cooked, decorated, and made it nice" at her Christmas party in the Berkshires. That rant and Medley's love of the holidays are both iconic.

A lot of people love the Housewives and haven't incorporated the reality stars into their holiday decorating, but Carson shares why the Real Housewives franchise holds a special place in his and Kluge's hearts: "The reason we did a Real Housewives tree is because our love of Bravo is what brought us together. It was a pretty major talking point for us on our first date." That is the epitome of #RelationshipGoals right there.

Even though both of them adore Real Housewives, the tree is actually results from a compromise between the two. "We both have very specific ideas of what we like from a Christmas tree. Matt likes a personalized tree with unique ornaments. I prefer a more uniform department store style tree with a cohesive theme," he says. "We put our heads together and came up with a tree that blended our love of Bravo with his personal touch and my love of a themed tree." And it is absolutely perfect.

Obviously, these two love the Housewives, but the Housewives also love them back. Real Housewives of Dallas cast members LeeAnne Locken, Brandi Redmond, and D'Andra Simmons left comments on the post Simmons even shared the photo on her own Instagram account.

And now for the moment everyone has been waiting for: Carson and Kluge's Real Housewives rankings. Carson notes, "We decided to rank them in five separate tiers. In no particular order."

Even though these rankings are subjective, Real Housewives fans everywhere can agree that this concept is genius, the execution is flawless, and it their tree is the ideal way to celebrate the holiday season.