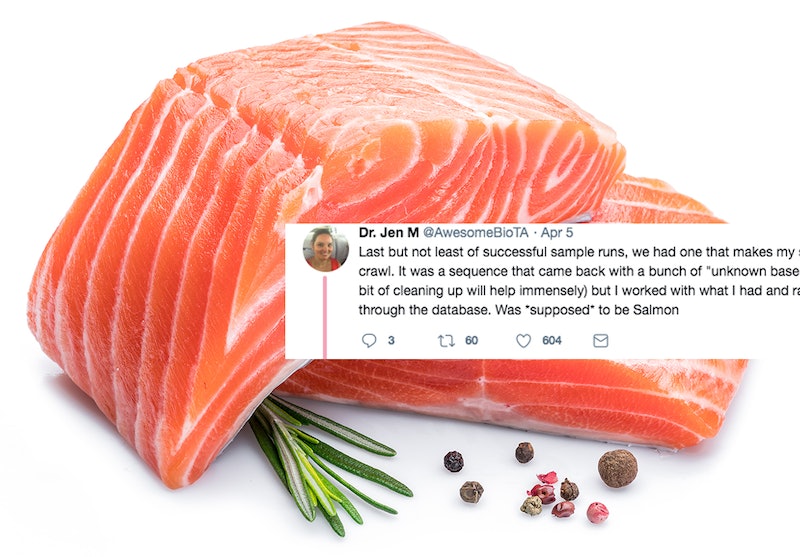 This might make you weary about eating fish ever again. As an assignment given to her molecular biology class, Professor Jennifer McDonald of Fanshawe College in Ontario, Canada asked her students to save cuts of sushi they ate at restaurants and fish they bought at supermarkets so they could test its genetic makeup later. It was an assignment meant to highlight the massive issue of fish fraud, or the mislabeling of fish products served commercially — pretty straightforward. However, it unfortunately led to a pretty horrifying discovery that, honestly, I'm still reeling from just reading about. According to Professor McDonald on her Twitter feed, @AwesomeBioTA, only two samples of the restaurant sushi and supermarket fish tested by her students were actually the same fish they were advertised to be — and one sample of a salmon fillet from a supermarket seafood counter was inundated with, get this... genetic material from body louse.

The issue of fish fraud is oft-spoken about in the U.S. For instance, in December 2018, the New York state Attorney General's Office shared a seafood fraud report and investigation titled "Fishy Business" (someone had fun naming this thing), which revealed that within about two-thirds of the seafood from supermarkets they reviewed, there was at least one instance of mislabeling. Similarly, Oceana, an ocean conservation group, released a report that said sushi restaurants across the U.S. that were reviewed by them in a recent study were mislabeled up to 74 percent of the time, as opposed to grocery stores which were only mislabeled 18 percent of the time. Additionally, the study pointed out that seafood fraud was found virtually everywhere, including the supermarket, proving just how ubiquitous and out of control this issue is.

What Professor McDonald and her students found in their experiment only make that more clear.

Bustle spoke with Professor McDonald over Twitter to get more information about the experiment, as well as what consumers can do to minimize their risk of falling for fish fraud... or unwittingly consuming body louse.

"I knew it was a very real issue in the seafood and fish industry," McDonald tells Bustle, "and some of my students will one day work in government testing labs so ... I wanted to do some kind of 'forensic analysis' with them so they gained experience with generating unknown DNA samples and how to analyze them." The experiment ended up being a success, despite its results: Of the 9 workable samples, only 2 were actually what they were advertised to be. (You can read the full journey of finding out what each fish sample ended up being on McDonald's Twitter — including the fact that one red snapper sample turned out to be tilapia.)

As for the body louse, well, that was a tougher discovery. According to McDonald on her Twitter, the salmon sample that the body louse DNA was discovered on was one purchased from an unnamed supermarket seafood counter, and the sample took a lot of "cleaning up" for its genetic material to get anything even close to an identification.

Even worse, there's hardly a doubt in McDonald's mind that this was indeed not fish DNA. According to McDonald over Twitter direct message with Bustle, she even reran the sample in hopes of finding a different result.

"I cleaned up the sequence and ran it back through the gene database to see if I got a better result," McDonald tells Bustle. "It came back to the same reference sequences for body louse, but with higher probability." And while McDonald can't be 100 percent sure of the identity of the sequence, she adds "I’m confident it’s at least closely related to body louse, and I’m also extremely confident it’s not a fish sequence."

OK, I know your jaw is in your lap right now and you're dying to scroll ahead to see what this means, but unfortunately it's a bit more complicated than that. Salmon have been known to catch sea lice, it's actually a condition that's plaguing the salmon supply globally, but sea lice are found in the sea and are not known to be particularly dangerous if consumed by humans. Body louse, on the other hand, are more commonly found on humans — they hang out in their clothes and on their skin — so how did this cross contamination occur and why?

According to McDonald, this could, theoretically be a fluke incident.

"It could have been deposited on the fish at any point from when the fish was cut open and filleted all the way through to cutting a small sample for our lab," she tells Bustle. "It could have been from the supplier, packer, shipper, grocery store stock room, person at the fish counter, or even the student."

So, what can you do to ensure your fish is free of body louse and fish fraud? Short of cutting out fish all together, there are a few things you can do to increase your chances of getting what you paid for at least at the grocery store. According to Oceana, you should always buy the whole fish when possible and talk to your local fish market grocer about the fish before you purchase it. Ask questions, like if it is wild or farm raised, and where, when and how it was caught. Last, check the price to ensure it makes sense. If you get the feeling that the grocer isn't too sure about where this fish came from and the price seems like a steal, it's likely fishy — trust your gut, and take your business elsewhere.