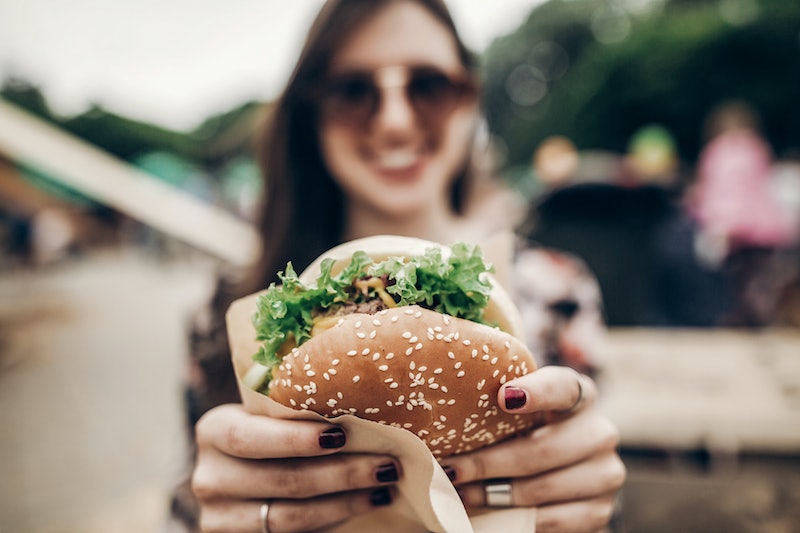 If your idea of romance involves diamonds and diner food, you’re in luck because one Boston restaurant is selling a burger with an engagement ring in it this Valentine’s Day. The $3000 burger/ring combo is being offered by Pauli’s, a restaurant in the North End, to anyone looking to pop the question to their special someone on February 14. It is simultaneously the most basic and the most extra thing that has ever existed and I think I love it?

The engagement ring is by Neil Lane and features a 7/8 carat diamond set in a 14k gold band. Round diamonds are set around the band as well. The Big Boy burger features zero-carat onion rings, golden American cheese (unspecified how many karats), bacon, BBQ sauce and a bun with the diamond ring nestled into the top. Yes, the ring is presented atop the burger like the delicious, edible ring box that it is. Oh, and it comes with a side fries.

No one has ordered the engagement burger as of yet, restaurant owner Paul Barker told the AP. However, Barker says that there are multiple people who are “very interested.”

Anyone looking to propose using a beef patty should contact the restaurant at least 48 hours in advance, as per a tweet from Pauli’s official account promoting the special.

“Nothing says ‘I love you’ like a ring with barbecue sauce dripping down your arm right?” Barker said to CBS Chicago. And honestly, if someone can’t handle you at your BBQ-covered worst, they don’t deserve you at your best. Or something like that.

Pauli’s isn’t the first comfort food place to offer an engagement special. In 2012, Pizza Hut ran a promotion for a $10,010 engagement party. The deal—I mean, if you want to call a $10k pizza party a “deal”—came complete with fireworks, a ruby ring (because red is more Pizza Hut’s thing), limo service, a professional photographers, a professional videographer, a floral bouquet, and (duh) a pizza. A $10 Dinner Box, to be exact. They only offered ten of these deals, but it doesn’t seem like anyone took them up on the offer.

Perhaps you aren’t quite ready for a wedding proposal but you still want to celebrate your Valentine’s Day in fast food fashion. White Castle has just the solution for you. As they have in years past, White Castle invites you and your Valentine to join them this February 14 by making a reservation for a romantic meal of their delicious lil sliders. If the most exciting part of Pauli’s deal was the burger to you (which same, I don’t blame you), you can still enjoy all the romance that is a Valentine’s Day burger without the lifetime commitment.

Whether they’re doing it with a burger or not, you can expect to see your social feeds filled with plenty of proposals in the coming week. Valentine’s Day is one of the most popular days to get engaged, second only to Christmas day. However, some research suggests you might want to reconsidered getting married on February 14. A 2016 report from the Melbourne Institute found couples who got married on a “gimmick-y” wedding date (i.e. Valentine’s Day or a date with repeated numbers a la 8/8/18) were 18 to 36 percent more likely to get divorced. (Maybe those numbers go down if there’s a burger involved?)

Is a diamond ring atop a burger a bizarre and over-the-top way to propose? I mean, did you even read that sentence? But what major life event wouldn’t be better if you were also presented with a burger? Imagine getting your college diploma and also being handed a cheeseburger. Just bought a house? Sign the deed as you chow down on this burger. Congrats on your baby and while you’re at it, here’s a burger. Perhaps Pauli’s is onto something bigger here.