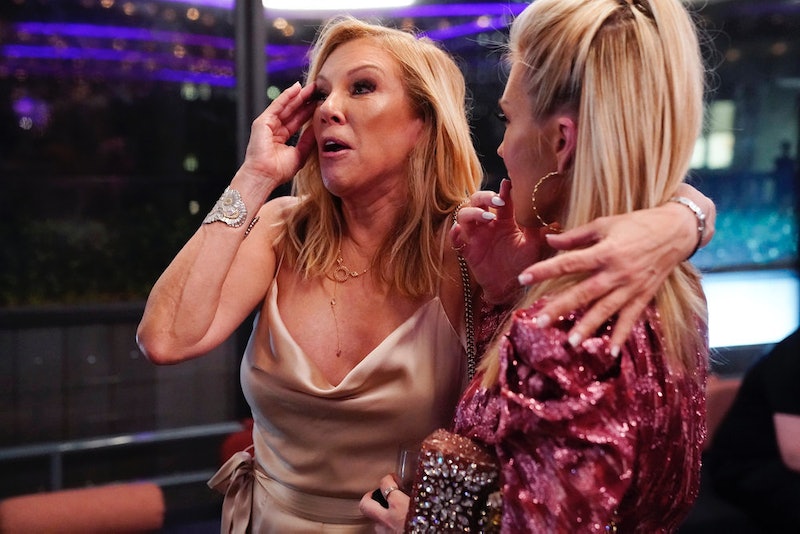 It's no secret that Ramona Singer and new housewife Leah McSweeney aren't exactly seeing eye to eye on this season of Real Housewives of New York City. And, well, this new RHONY Season 12 trailer shows Ramona officially hitting her breaking point with Leah. So much so that at one point, Ramona demands the cameras stop rolling.

During an event the women are attending, Leah and Dorinda Medley are seen grinding on top of Luann de Lesseps. Ramona becomes very upset and tries to break them apart. In between Leah yelling at Ramona, "You're being psychotic!," the queen of Pinot Grigio declares, "Cameras down. We're done! We're done!"

Even though Leah and Ramona have been at odds this season, they've always managed to make up and move forward. But it looks like they might just reach their breaking point. In past episodes, Ramona has made it clear she doesn't like how Leah acts sometimes, especially when she drinks. Leah, meanwhile, has been very open about her decision to start drinking again after taking a break for nine years. "Me an alcohol have a very weird relationship," she said in an episode. "I am someone who actually enjoys like, completely like, going crazy."

Well, based on the trailer, it looks like the crazier Leah gets, the more her relationship with Ramona sours. There are also several moments in the midseason trailer teasing drama between the two, including Leah saying, "But, you're talking about my vagina to half the Upper East Side." To which Ramona yells, "I don't talk about it. You're talking about it."

There definitely seem to be many rocky moments ahead for Ramona and Leah. Who knows if they'll get on the same page by season's end. But, of course, it wouldn't be RHONY if there weren't also some more lighthearted moments to look forward to. Longstanding fans of the show will notice a handful of callbacks to previous seasons in the trailer, including Ramona's iconic Turtle Time and Luann's Season 4 camel adventure.