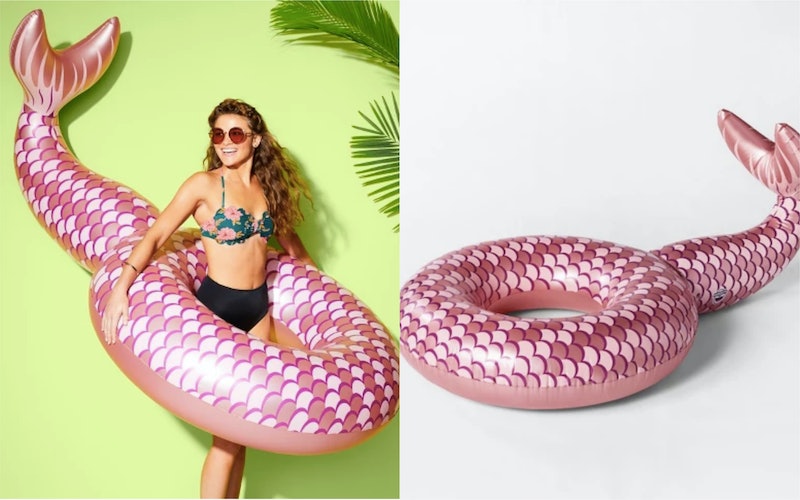 It is summertime and you're at the pool with your family. You can't be more than ten, maybe eleven years old. You've always felt most at home in the water, to a point where you wonder if it's normal. Maybe deep within you're not only a human, but something far more aquatic: a mermaid. Even though the others can't see it, the evidence is clear as the water: your inner self has a fishtail. You're grown up now and though your inner mermaid may be more concealed now, you can finally show it off with a Rose Gold Mermaid Tail Pool Float.

It is *almost* as good as the real thing, though Ariel might disagree with that. But the real magic of the pool float is in its design. As Target explains, the float "looks like a standard round pool float at first, but it's followed up by a glimmering, scaled mermaid tail in a gorgeous rose gold that might just make all of the other mermaids jealous." It is just about as close as you can get to having your own metallic pink mermaid tail without involving some extremely sketchy science. Since we are at least 50 years and millions of dollars of research away from the ability to turn ourselves into full-time mermaids, in the meantime, Target's $20 version will have to do the trick.

Mermaids are doggone trendy in this day and age. The mystical figures have been around for literal centuries, but something about the current climate has made these scaly sirens all the more appealing. In the past, the closest you could get to being a functioning mermaid was dying your hair fire engine red and sporting a lilac shell bikini. But that's kids' stuff compared to what you can do now. In addition to the Mermaid Tail Pool Float, there are a number of things you can buy to channel your inner (and outer) mermaid. Here are some highlights:

If you're going to ride in a shimmery pink mermaid float, you've gotta dress the part, too. These swimsuit bottoms, modeled after none other than the tail possessed by Ariel in The Little Mermaid, features green metallic scale-like design. They're high-waisted, and have a fancy little cross-strap design on the hips.

Apparently there is a large market for decorating (and functional) mermaid tails, and the MerTailor has it cornered. The MerTailor makes custom mermaid tails using measurement you send them. For a little over $1000, you can purchase one made from silicone that you can wear in water — but if you're just looking for something to wear next to the pool, the fabric ones will do.

Last but not least, even if your DNA is not that of a mermaid, you need water just like they do. Stay hydrated in style with this custom water bottle that features a mermaid decal, accompanied by the phrase "You can't be a mermaid without water." The bottle can be customized in a number of colors, as can the designs depicted on them.

In short, there are plenty of ways to be a mermaid this summer, tail or no tail — but if you're looking for a cute pool Insta that won't break the bank, Target's pool float is the way to go.