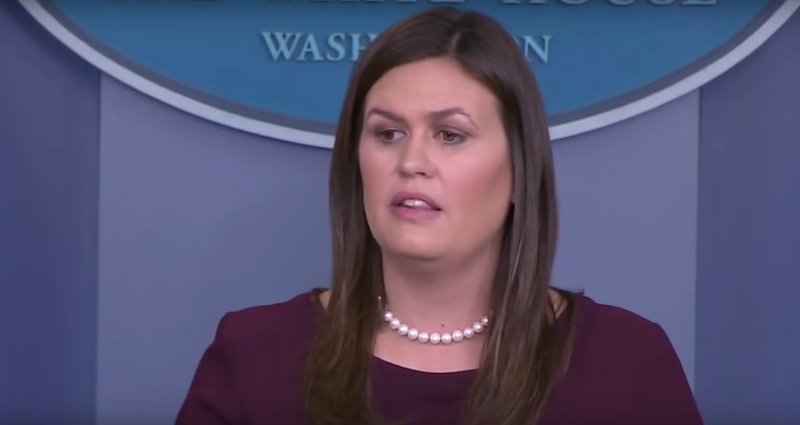 Bad Lip Reading has delved into politics many times before. From Clinton-Trump debates to Inauguration Day videos, the YouTube channel offers funny takes on what the country's politicians are saying based just on how their lips move — more or less. The Sarah Huckabee Sanders Bad Lip Reading video shows you another version of what Sanders' lips could say with arguably more attitude (and a lot less sense).

The clip begins hinting that the press secretary doesn't want to be there. "I need a drink," Sanders begins. "OK, idiots, are you ready? I just can't stand the faces of you people." The fake voiceover doesn't sound like Sanders, but it's not far off either, and it times her inflection with smiles in a way that makes everything sound insincere.

The fake Sanders has a nickname for everybody, and she addresses each reporter as she calls on them. Among nicknames are Creature, Gredo, Chomp, Chocolate Curl, Sasquatch Steven, and Stink Leg. Weirder moments involve a reporter asking for a foot rub and offering to tickle Sanders' feet in exchange. "You're weird," she responds.

ABC's Jonathan Karl — known in the clip as Stank — starts to ask a question when the fake Sanders says, "You really thought I'd take a question? You suck."

In short, it's a ridiculous parody, but it also plays into some of the critiques of Sanders. At the beginning of August, Sanders was criticized for not saying forthright that the media is not the "enemy of the people," as the president had tweeted. Pushed on the matter, Sanders attacked back, saying the media had resorted to "personal attacks without any content other than to incite anger."

"As far as I know I'm the first press secretary in the history of the United States who has required Secret Service protection," Sanders said during the contentious briefing, implying the threats were the fault of the media — in part because of a comedian the White House Correspondents' Association hired at their fundraiser this year.

"I actually really like Sarah. I think she’s very resourceful. She burns facts and then she uses that ash to create a perfect smoky eye. Like maybe she’s born with it, maybe it’s lies. It’s probably lies," Wolf said of Sanders.

At the August briefing, though, Sanders picked out another joke, in her explanation that the media had "attacked [her personally]." Sanders said that Wolf had called her a "traitor to [her] own gender."

At the dinner, Wolf implied Sanders was a traitor to white women specifically and compared her to Ann Coulter. "What’s Uncle Tom but for white women who disappoint other white women? Oh, I know. Aunt Coulter," Wolf joked.

"We certainly support a free press," Sanders went on to say at the August briefing. "We certainly condemn violence against anybody, but we also ask that people act responsibly and report accurately and fairly."

The video of bad lip syncs doesn't explicitly support a free press, but it is an example of freedom of speech — and maybe something both Sanders and the featured reporters can laugh at.