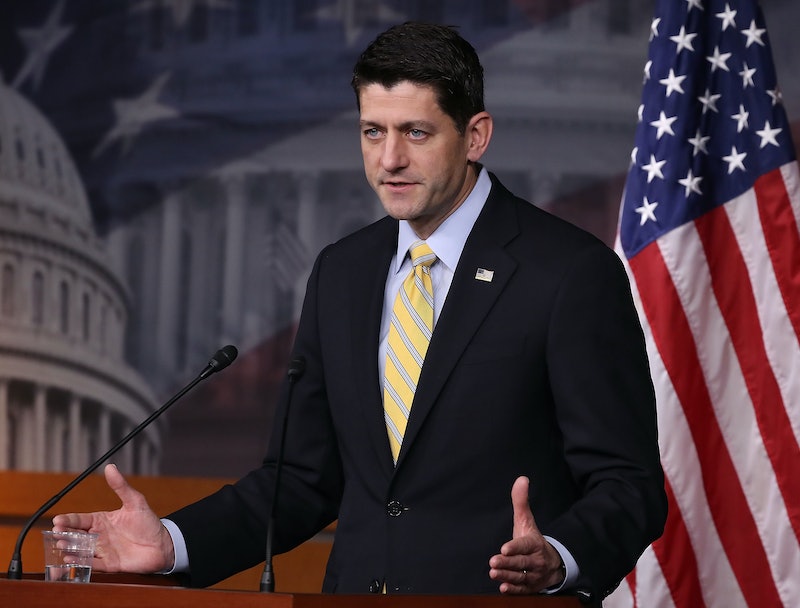 On Tuesday, the Congressional Budget Office released a report which forecast the fallout of the Republicans' feverish drive to get rid of the Affordable Care Act, and it painted a pretty scary picture. Scariest of all: By 2026, as many as 32 million people would be uninsured after the repeal, many of them young people. Reading between the lines, this means more millennials would likely end up saddled with crippling medical debt.

The Republican-controlled Congress passed the first portion of the repeal last week — a budget resolution that will allow the GOP to gut the law without requiring the 60 votes necessary to override a filibuster in the Senate — clearing the way for a swift dismantling of the law once Donald Trump is sworn in.

But the report from the CBO paints a bleak picture for what happens after the landmark healthcare reform bill is repealed. In addition to the high numbers of uninsured, for those who remain on the exchanges premiums are likely to double. Moreover, millions of low-income individuals who qualify for Medicaid under the ACA may lose that coverage once it’s repealed.

What’s interesting about the report is that it predicts that most of the loss of insured people will come not from those who are kicked off their plans, but from people who choose not to get insurance once the individual mandate is repealed. The mandate is the rule which says everyone must have health insurance, or face a tax penalty. The people most likely to drop off the exchange in this instance are young, healthy people, which is problematic for two reasons.

The first is that these young, healthy people help spread the risk around within the insurance pool, lowering the cost of premiums for everyone. Their presumed departure from the exchanges is what accounts for the projected rise in premiums.

But there’s another layer beneath that which should also alarm millennials — if more young people are uninsured, that means that more young people will end up needing health care but they won't have insurance. While insurance companies project health risk based on your health profile, they can’t anticipate things like accidents, injuries, infectious diseases, or unanticipated health complications. For good or ill, one thing the ACA endeavored to deliver was near-universal catastrophic coverage, keeping people from losing everything to medical expenses.

In the end, the impending demise of the ACA should scare everyone — hospitals are already warning of the fallout the Obamacare repeal would have on hospital jobs — but this latest report should jolt you out of your chair and to your Congressperson to make your feelings heard.