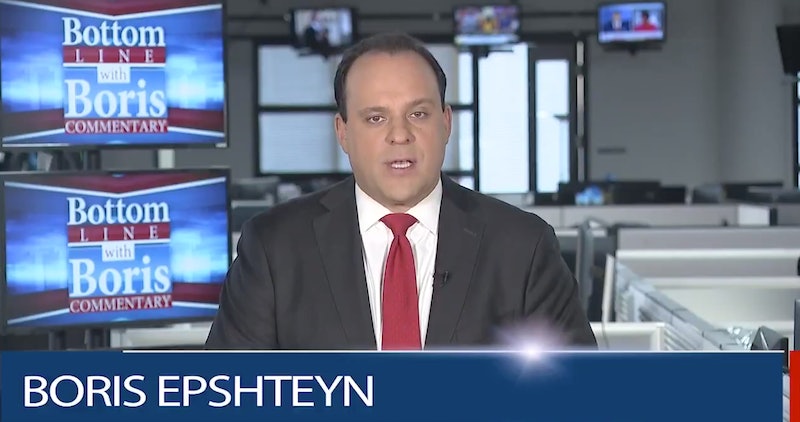 Many local news stations have shown a segment that defends tear-gassing migrant families, including young children, at the border in San Diego on Sunday. The segment calls the asylum seekers an "attempted invasion of our country" and singles out Rep. Maxine Waters for defending them. Pro-Trump local media conglomerate Sinclair had local stations show the tear gas segment, Media Matters reported.

The clip features Boris Epshteyn, who is Sinclair's chief political analyst and a former Trump aide. "The migrant crisis on our southern border has greatly escalated," Epshteyn says, beginning the segment, which features video of the tear-gassing from a distance and lots of other immigration-related clips. Media Matters reported it is being shown during local newscasts at some 100 local stations across the country.

Epshteyn says the migrants attempted to "storm" the border in hopes of claiming asylum and presents the border guards as having acted only in self-defense. "Dozens of migrants attacked U.S. border enforcement by throwing rocks and bottles," he says. "Ultimately, American authorities had to use tear gas to stop the attacks."

That assertion is countered by rights groups including the American Civil Liberties Union. Jamil Dakwar, director of the group's human rights program, wrote an op-ed in The Washington Post that argued the force the border guards showed was not "proportionate to the seriousness of the offense and the legitimate objective to be achieved."

Epshteyn did not only defend the border guards' actions but also attacked those who criticized the use of tear gas. "Some on the left, such as Democrat Congresswoman Maxine Waters, were immediately up in arms about our president and his team standing up for our men and women in uniform and for our national security," he says.

Waters has been regularly attacked by Trump and has had to cancel public appearances due to death threats. Epshteyn did not specify what Waters said.

"The fact of the matter is that this is an attempted invasion of our country," Epshteyn continues. "It unfortunately appears that there are many on the left who believe it is wrong to defend our country and abide by the rule of law. I would bet that many of those same people live behind walls and locked doors but do not want to afford the same benefit to our country as a whole."

Epshteyn ends with an attack on the migrant caravan and accuses them of entering illegally — even though they were attempting to request asylum at a port of entry, one option spelled out in the law. "Here’s the bottom line: The notion that a caravan of migrants can be allowed to break through our borders is ludicrous and dangerous," Epshteyn says. "The United States of America should not and cannot be intimidated by those willing to use force to get into our country illegally."

According to the law asylum seekers are able to seek asylum regardless of where they cross the border. The Trump administration tried to challenge that, but the new policy was rejected by the courts. Processing times for asylum at ports of entry have grown, making irregular crossings more tempting.