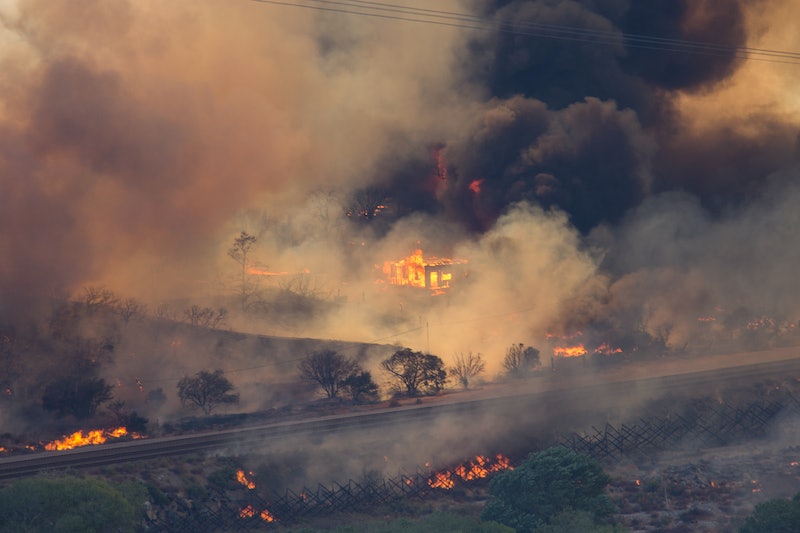 The West Coast is thousands of miles away from New York City, but on Monday, smoke from California's wildfires reached the East Coast. And a map from the National Oceanic and Atmospheric Administration shows just how incredibly long the hazy trail was.

According to SFGate.com, the smoky skies were due to the destructive fires that came from Butte County, California. The smoke traveled across nearly 3,000 miles and reached not only New York City but also New Jersey and Philadelphia.

The fires, which began on Nov. 8, have caused tremendous damage, scorching 151,373 acres of land and razing 12,637 residences to the ground, according to SFGate.com. Scores of domesticated pets and wild animals have been displaced by the roaring fires, while at least 79 people have died as a result. Local authorities reportedly say that 70 percent of the wildfire is now under control, some 12 days after the fires began.

Today Show meteorologist Kathryn Prociv was one of the people to notice the hazy skies in New York City on Monday. "Wow," Prociv tweeted. "I knew tonight's sunset over New York City seemed different, and I should've realized! Wildfire smoke is in the air, all the way from California."

If you look at the NOAA map, you'll notice the long-winded trajectory of the California fire smokes across the United States. Originating in the West coast, where you can see the dark red and orange imprints on the map above, the smoky trail then wafts south and heads toward the East Coast. It touches states like Arizona, New Mexico, Texas, Arkansas, Kentucky, and then further into North Carolina, Virginia, upto New York itself.

Now, you might be wondering, "How can we be so sure that the hazy skies in New York City are due to the wildfire in California?" It's a fair question. According to CNN, the radar imaging from NOAA indicates the origin of the smoky trail. But you can also ascertain the nature of the hazy sky by checking out the time you see it.

Meteorologist Judson Jones told CNN, "When smoke gets caught up in the higher atmosphere it can travel across the country and even farther. But the farther away it travels the harder it is to distinguish as the smoke particles disperse. Often the only way to see it is during sunrises and/or sunsets when the sunlight is refracted, showing off the upper atmosphere."

In spite of how disturbing it might be to some observers, this is not the first time that Californian smoke reached the East Coast. In August, West Coast smoke from the Mendocino Complex fire went all the way to the American Northeast. And just how does this all happen? Meteorologists say that the wind carries the smoke up into the air and transfers it across large swaths of land.

Don't worry, though. There are ways to keep your loved ones and yourself safe in such circumstances. If you live in California, the National Weather Service recommends that you take extra care with inhaling when you step outside. On top of that, buy an air purifier if you can and get your hands on a respirator mask to fight off air pollutants.