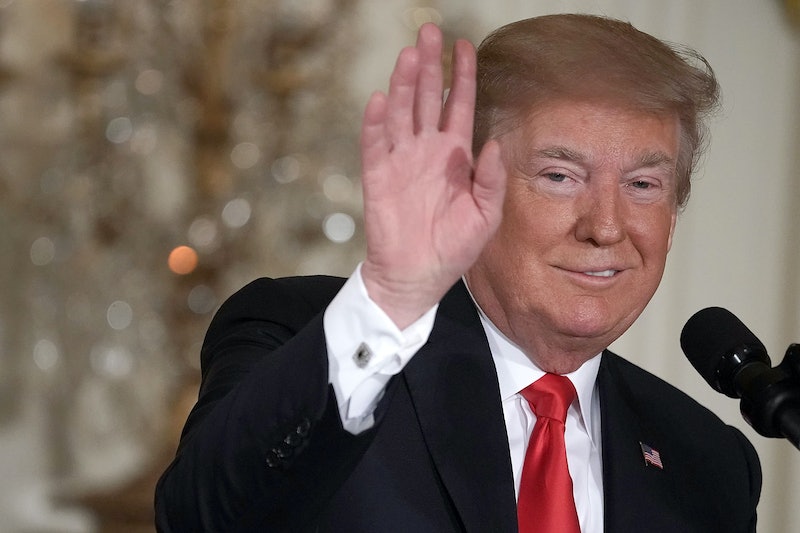 The United States is one step closer to having a branch of the military that's specifically devoted to outer space. On Tuesday, President Donald Trump signed a "Space Force" order that started the process of creating the new branch after months of planning.

The directive states that the branch's purpose is to "deter and counter threats in space." Satellites are a potential target for opponents in wartime, particularly since they help enable the internet, weather predictions, and GPS. Russia and China are both working on weapons that could harm American satellites, according to The New York Times.

"Space is integral to our way of life, our national security, and modern warfare," the order reads. "Although United States space systems have historically maintained a technological advantage over those of our potential adversaries, those potential adversaries are now advancing their space capabilities and actively developing ways to deny our use of space in a crisis or conflict."

But critics fear that creating a so-called Space Force will encourage the militarization of space. While the 1967 Outer Space Treaty prohibits countries from putting nuclear weapons in space, they are allowed to have other kinds of weapons there, as Bloomberg reports. (Vice President Mike Pence has implied that the United States should keep the option of nuclear weapons in space on the table, despite the 1967 treaty.)

The president had originally suggested that the force be a separate branch of the military on par with the Air Force, Army, and Navy. He received some backlash after describing his plan with the term "separate but equal" — a phrase from the era of segregation — last June. But Tuesday's order declared that the Space Force will exist as a smaller branch within the Air Force (similarly to how the Marines are commanded by the Navy).

"If enacted, it will be our responsibility to deter and defeat threats in space through the U.S. Space Force, which will organize, train, and equip military space forces," the Air Force told Space.com on Tuesday. "It will be our obligation to ensure unfettered access to, and freedom to operate in space, and to provide vital capabilities to joint and coalition forces."

The Trump administration has been working toward a Space Force for some time. The president created a National Space Council within the first six months of his tenure. And after he publicly floated the idea of a Space Force last June, the council agreed to send him a series of proposals for how to make it a reality.

The plan has even caught the attention of the entertainment industry. Last month, Netflix picked up a Space Force comedy series co-created by Steve Carell and The Office showrunner Greg Daniels. The show will reportedly portray the workplace of employees who are creating a new, sixth branch of the military devoted to space.

There's still a lot that needs to happen before Trump's Space Force is a reality, though. Tuesday's order directs the Air Force to draft a proposal for creating the force, and that proposal will later need congressional approval. Still, the directive marked a significant step toward increasing the United States' involvement in space.

"When it comes to defending America, it is not enough to merely have an American presence in space," Trump said in June, per Bloomberg. "We must have American dominance in space."