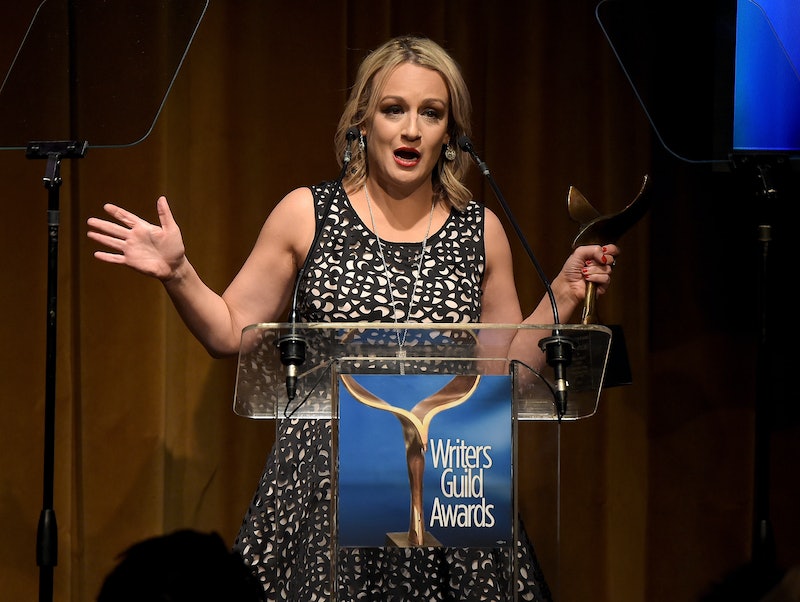 Last month, a festival celebrating web series and independent television, called Stareable Fest, took place in NYC. Like most TV and film festivals, the web series festival gave out awards to honor filmmakers, but also held panel discussions on important, much-discussed topics. One Stareable Fest panel tackled the under-representation of women in media, and the panelists gave some seriously great advice for creatives who belong to marginalized groups.

Four women who work in entertainment spoke on the panel — Abra Potkin, Daryn Strauss, Sinead Persaud, Keisha Zollar — and they each shared their own experiences in the industry. Strauss, who created a web series called Downsized, laughed when she told the audience, "In TV they have diversity programs... and part of the diversity is women, like just being a white woman is considered diverse in a writing room."

One would think that since women aren't actually a minority, that wouldn't be the case, but the fact that a study reported by Variety found that 33 percent of TV writers were women proves that those diversity problems are necessary. As actor and writer Zollar said on the panel, "We have to be there for all the 'no's' that are inevitable, however when you're underrepresented there's an added pressure because you feel like you're already told 'no' the moment you walk in the room."

Not only do marginalized and under-represented groups face many obstacles just to get in the room, but once they're there, they don't necessarily receive the same treatment as white men. Potkin, who serves as the head of talent relations and strategy for Verizon's Oath Studios, explained on the panel how the industry depends on women to ask for less money than men. "I'm sure that it's in meetings when they're budgeting, like 'how many women will be on the team?' We expect that you're not going to come to the table in the same way a man will come and demand, 'if I don't get this money I'm going across the street to someplace else,'" she said.

While everyone on the panel agreed that women should understand and assert their (high) value more often, Zollar pointed out that the entertainment industry often underestimates the economic value of stories told by marginalized creatives. Zollar told the panel that executives often look at "women, people of color, the queer community, and they'll look at those stories and go 'hmm that's high risk.'" The best way to ensure that more diverse stories get told, she continued, is to spend your money as a consumer.

"I think it's profound to engage and vote with your dollar when you can... Because the only way to shift that narrative — because that's a hundred percent bull-sh*t. People want to see themselves reflected in their entertainment," Zollar said. "When you see female creators, buy their content even if you can't consume it right then."

Fortunately, Potkin, who's worked in the industry for over 20 years, told her fellow panelists that she has a lot of hope now that creative people have too much access to showcase their talents. "The coolest thing has happened in the industry which is these traditional channels and these road blocks have come down, not that it's easy now, but we, who are in a position to actually green-light things, recognize now that it doesn't have to come in through CAA or WME, that it actually could be sitting right next to you," Potkin said.

Potkin also advised that all creative people prioritize focusing on the quality of their content. "What breaks through all the clutter or all the different personalities is really good stuff, and just constantly putting it out there, and as frustrating as it can be, eventually it does get found," Potkin said. If you're creative and you're hoping to get a job in the entertainment industry, knowing your worth is the most important thing. After that, you'll have the confidence to create your own exceptional work and get it out to the world in any way you can.

Disclosure: Bustle is a sponsor of Stareable Fest, which took place in New York City on July 20-22, 2018.