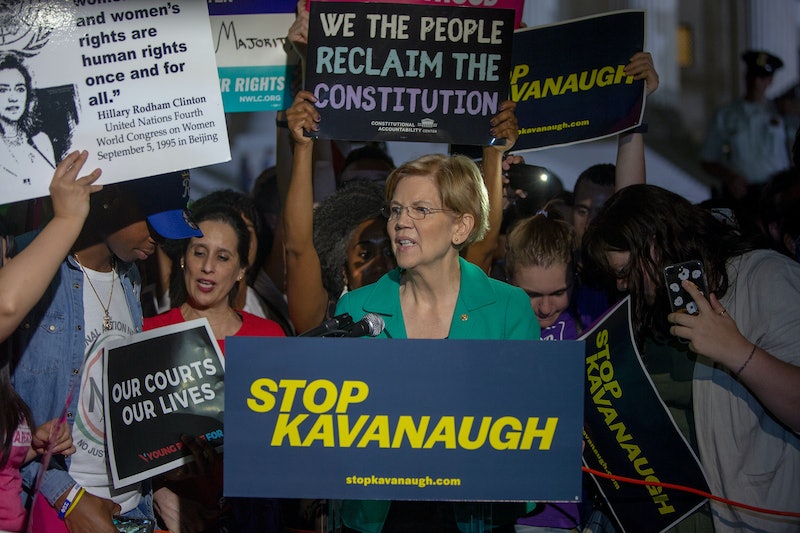 Following over a week of anticipation, on Monday evening President Donald Trump announced his nominee to replace retiring Justice Anthony Kennedy on the U.S. Supreme Court. There has been much buzz about Trump's pick and, indeed, this statistic on Supreme Court justices puts Brett Kavanaugh's nomination into sobering perspective. The startling stat reveals just how few women and minorities have served on the Supreme Court over time — an issue certainly not aided by Kavanaugh's nomination.

CNN reported that, throughout American history, there have been 113 justices who have served on the highest court in the country. Of these 113 judges, all but six have been white men. There have been four women to serve on the Supreme Court and only three minorities (Justice Sonia Sotomayor is a woman and a Latina, qualifying in both categories).

The first-ever woman confirmed to the Supreme Court was Sandra Day O'Connor. She was nominated in 1981 by President Ronald Regan. Three women followed in O'Connor's footsteps. Ruth Bader Ginsburg was nominated by Bill Clinton in 1993, and Sonia Sotomayor and Elena Kagan were nominated by Barack Obama in 2009 and 2010, respectively.

Thurgood Marshall was the first minority justice appointed to SCOTUS. Marshall, an African-American, was nominated by Lyndon B. Johnson in 1967. Clarence Thomas, who is also African-American, constituted the second minority judge appointed to the court. He was nominated by George H.W. Bush in 1991. And, as previously mentioned, Sotomayor was confirmed to the bench in 2009.

As I listened that day to Justice Marshall talk eloquently to the media about the social stigmas and lost opportunity suffered by African American children in state-imposed segregated school, my awareness of race-based disparities deepened ... At oral arguments and in conference meetings, in opinions and dissents, Justice Marshall imparted not only legal acumen, but also his life experiences, constantly pushing and prodding us to respond not only to the persuasiveness of legal argument but the power of moral truth.

Bader Ginsberg, a current Supreme Court justice, has similarly indicated that she believes that women justices' unique life experiences can help inform their judicial decisions. When asked by The New York Times in 2009 if she felt that discrimination cases would turn out differently if the Supreme Court had more women than men, Ginsberg replied,

I think for the most part, yes. I would suspect that, because the women will relate to their own experiences ... I think the presence of women on the bench made it possible for the courts to appreciate earlier than they might otherwise that sexual harassment belongs under Title VII [as a violation of civil rights law].

However, despite the benefits brought by diversity of experiences and backgrounds, SCOTUS has nonetheless had very few women and minority justices. Moreover, this problem is not limited to the Supreme Court. Indeed, as the National Women's Law Center reported in 2016, only 36 percent of judges in 13 federal courts of appeal in the United States are women — and only 7 percent of these judges are women of color. Moreover, only 33 percent of active United States district court judges are women.

Clearly, the United States still has a long way to go when it comes to creating a judiciary in which women and minorities are truly represented. Unfortunately, this pervasive problem extends even to the nation's highest court.