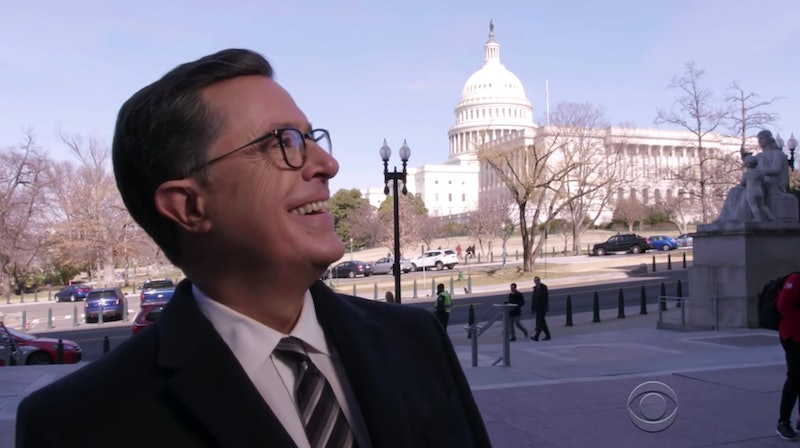 If you thought the Republican Russia investigation memo and then the Democratic rebuttal memo released last month were at odds, you should see the burgeoning feud between Stephen Colbert and Rep. Devin Nunes. Nunes heads the House Intelligence Committee and is the key Republican responsible for the dueling memos. He didn't take kindly to being teased by Colbert and called the jokes a "danger" to the country.

Colbert made the jokes about Nunes and the memo on Friday night's episode of The Late Show. "To anyone out there who thought politics wasn’t exciting,” Colbert said, “you’re right.”

But leave it to Colbert to make even memos entertaining. The host went to D.C. for a 10-minute segment and interviewed members of Congress about the dueling memos that explore whether the FBI went about getting a surveillance warrant on a key Trump adviser correctly.

In his segment, Colbert interviewed a number of politicians working on the Russia investigation and tried to see if he could get a preview on the investigations' findings. He also made his very own memo — at Nunes' expense.

Colbert had the top Democrat on the House Intelligence Committee, Rep. Adam Schiff, read it. "It says, ‘Devin Nunes is a,’ and then it’s redacted,” Schiff said.

“We’re not allowed to release that information right now,” Colbert responded, explaining the redaction. “CBS won’t let me say it on air either.” He then handed out copies all around the Capitol and even taped a copy to Nunes' office door.

Moving to offices of the Senate, Colbert had a conversation about what the full memo could say with Republican Sen. Jeff Flake. "Do you have any guesses what it could say under there?" Colbert asked Flake. Flake offered up "Californian" and "former dairy farmer."

"Former dairy farmer?" Colbert asked. "Really? Because he seems to be milking it right now."

Nunes clearly did not find this funny. Asked by Fox News’ Neil Cavuto on Saturday what he thought of Colbert's jokes, Nunes was extremely serious. "This is the danger that we have in this country," Nunes told Cavuto. "The left controls not only the universities in this country, but they also control Hollywood in this country, and the mainstream media, so conservatives in this country are under attack ... they attack people who are trying to get to the truth."

Nunes said he didn't know if Colbert had contacted his office to participate in the episode. "It's possible," he told Cavuto.

Nunes also tried to discount the seriousness of the Russia investigation, telling Cavuto that there is no proof of wrongdoing on the part of Trump. The investigation by the special counsel Robert Mueller has resulted in 19 indictments and guilty pleas.

Colbert has not responded to Nunes' accusations of being a "danger." But Democrats have argued that the GOP is on edge. Schiff wrote an op-ed in The Washington Post after the Republican memo was released claiming that the Nunes memo is just an attempt to distract from the fact that there's a lot of evidence.

"As Mueller and his team move closer to the president and his inner circle, a sense of panic is palpable on the Hill," Schiff wrote. "GOP members recognize that the probe threatens not only the president but also their majorities in Congress."

That could help explain Nunes' touchy response to Colbert's jokes.