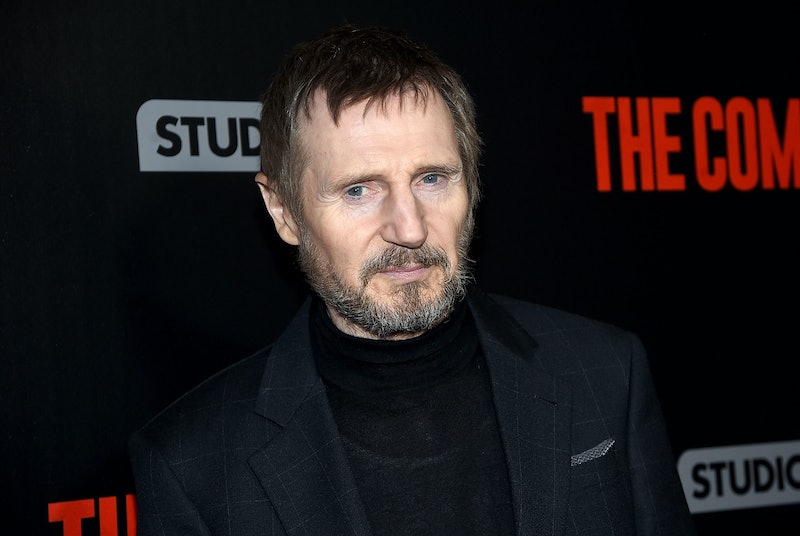 No matter what side of the proverbial aisle someone sits or where they stand on the political spectrum, you'd be hard pressed to find someone who's not feeling the stress of the current news cycle right now. So when some good news comes out, you have every right to latch onto it as if it were a wild mustang you're riding on a rocky path. That's what everyone on Twitter is doing with this story about Liam Neeson and a horse. Page Six reported on Monday, Oct. 8, that a horse recognized Liam Neeson on the set of the new movie, The Ballad of Buster Scruggs, and it's the heartwarming story we all deserve.

It turns out that not only did Neeson reunite with James Franco, his co-star from 2013's The Third Person, on the Buster Scruggs set, but he also reunited with a past four-legged co-star. "I play a traveling impresario [In Buster Scruggs]. We filmed in New Mexico. The odd thing is the horse who pulls my wagon knew me," Neeson told Page Six. Then, he further explained, likely anticipating that everyone's knee-jerk reaction to his first statement would be, "come again?" Neeson continued:

"You won’t believe it. I’m saying this horse knew me. He actually remembered me from another Western we made a while back. I love animals. When we worked together before I took special care of him. I fed him treats. Gave him apples... He whinnied when he saw me. And pawed the ground."

As you can imagine, the news that Neeson had a special animal friend in not just one, but two movies made people on Twitter giddy — not as in "giddy-up," but just happy. That's right, for once, the news made people happy.

Some fans responded to Page Six's surprising report by fantasizing about Neeson being some kind of horse-whisperer, which, to be honest, he just might be.

But wait, it gets better. In response to the Twitter reaction to Neeson's horse story, fellow actor Russell Crowe hopped online to tell his own recurring horse co-star story. Actually, make that two stories as Crowe apparently had a horse from one movie show up on the set of another two different times. Crowe's tweet from Monday night said, "There’s a horse George who I gave the speech in the forest in Gladiator on. Years later he was on the set of Robin Hood and we would have a chat everyday. Same with the white horse Rusty in Robin Hood we chatted again on Les Mis. Lifelong friends."

Crowe basically just rode up like a knight on his steed to confirm that Neeson's story could very well be true. After all, as Crowe's tweet suggests, he's been in a lot of movies involving horses, so he might as well be an expert on horse co-stars.

Now when fans go see Neeson in The Ballad of Buster Scruggs, they'll be looking for the horse in question. And until we get the movie about a Liam Neeson-obsessed horse that we all need and deserve, it'll have to do.