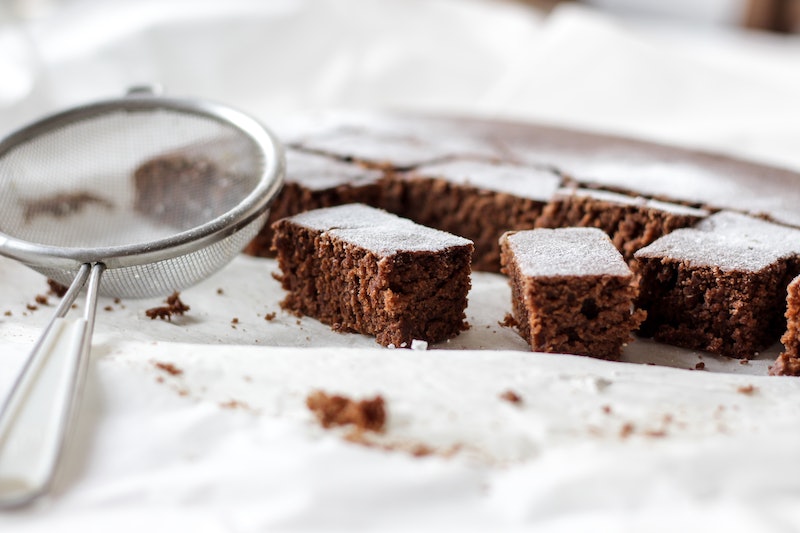 The Internet is a treasure trove of oddities, but the title of greatest online comment of all time should inarguably be bestowed upon a brief story left on a New York Times recipe for brownies. In less than 100 words, the mysterious Sydne Newberry recounted a tale of sugar, spice, and adultery that has captivated readers for years since her comment was posted. Even the Times moderating team, whose job is to keep things sedate and respectable, call it their "all-time favorite." At last, she has been given the chance to expand on her tale, and the details only make it more fascinating.

But first, without further ado, you'll want to read the story itself. In 2015, the Times published a recipe for Katharine Hepburn's brownies. In the comments below the article, Newberry gifted the world with the following tidbit of brilliance:

"This has been my go-to brownie recipe for 30 years. In the '80s, an acquaintance in Germany to whom I brought some of the brownies, and who considered herself a great cook, asked for the recipe but was never able to get it to work. She kept asking me what she was doing wrong and I was never able to solve her problem. Eventually, she moved to the U.S. and stole my husband!"

Plot. Twist. So, to recap: An acquaintance failed miserably at baking Katharine Hepburn brownies, then they proceeded to have an affair with Newberry's husband. Was it revenge? The act of a brownie-starved madwoman? These are the questions that have kept the comment alive for so long. Screenshots of the comment have made the rounds on social media a few times over the past two years, and on Friday, it surfaced again.

"The greatest living short story writer is Synde Newberry & she publishes in the comments section of brownie recipes," tweeted Sam Biederman, the Assistant Commissioner for Communications at NYC's Parks and Recreation department.

Another user tagged Newberry in the tweet, and to the delight of readers everywhere, she actually responded.

Now that she resurfaced, the obvious next step was to beg her to explain how on earth a Times brownie recipe ended with a stolen husband. Fortunately, the enterprising souls over at The Cut did exactly that, tracking her down for an interview.

As it turns out, Newberry is a communications analyst, medical editor, and nutritionist living in California. She met the acquaintance, an Italian woman she called a "real food snob," through their respective husbands while temporarily living in Germany. She baked the couple brownies using the Times recipe, which she also passed along at the woman's request. However, the acquaintance — let's call her Food Snob — couldn't seem to get it right, despite Newberry's attempts to help via snail mail. In the end, Food Snob implied that Newberry had sabotaged the recipe.

Things escalated three years later, when the acquaintance came to visit after she and her husband separated. Newberry told The Cut that while she was out one day, her neighbor asked her how she felt about Food Snob and her husband "fooling around." She brushed it off, but later, she caught them in the act. Food Snob returned to Germany, and Newberry's husband soon followed.

"I took the opportunity of his absence to move out. A few months later, [the acquaintance] was back but I never spoke another word to her," Newberry concluded.

There you have it. The mystery of the Hepburn Brownie Comment has been solved. (You can read the entire story over at The Cut.) In case you're wondering, Newberry snagged herself a different husband who appreciates both her and her brownies. Maybe online comment sections aren't so scary after all.