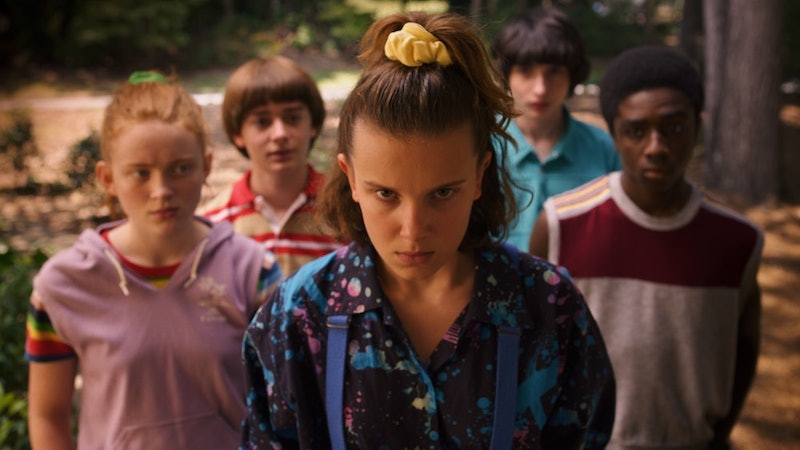 Spoilers ahead for Stranger Things 3. Could a DeLorean soon be built in Hawkins, Indiana? On the heels of the new season, fans have speculated that Stranger Things will soon introduce time travel to the hit series, according to a Fandom theory post by user Circastreep. As fans very well know, nothing is quite coincidental in the world of Stranger Things. In Season 3, Episode 7 titled “The Bite,” Dustin and Erica return to the underground lab to (successfully) rescue Steve and Robin. With both of them still heavily drugged from interrogation, the four lay low in the movie theater in the mall — which is currently amid a Back to the Future screening. In turn, fans are convinced that the Scoop Troops' backdrop of Doc and Marty at the Twin Pines Mall could possibly hint at next season’s storyline. Now, this Stranger Things 4 time travel theory may have been just been confirmed by the Duffer brothers themselves.

In a new interview with Entertainment Weekly, the Duffer brothers seemingly confirmed this fan theory while teasing Season 4 (though the series hasn’t officially been renewed by Netflix just yet). As it turns out, the brothers already have a very good sense of Season 4’s storylines. According to Ross Duffer, fans can expect the new season to “feel very different.” But more so, Matt Duffer may have just confirmed fan suspicions of time travel.

“I think the biggest thing that’s going to happen [in Season 4] is it’s going to open up a little bit, not necessarily in terms of scale [or] in terms of special effects,” Ross told EW. “But open up in terms of allowing portals into areas outside of Hawkins.” Portals? As in a portal that will allow time travel? Back to the Future style?

According to Ross, he and brother Matt already have “big broad strokes” of ideas on just how Season 4 will progress. “We don’t want to write ourselves in a corner, so we try to have these early discussions with the writers just to make sure that we’re setting ourselves up to go in the right direction. We don’t know a lot, but we do know a lot of the big broad strokes,” he told EW. “At the end of season two, we knew about Billy. We knew that the Russians were going to come in. We didn’t know the mall and stuff, but again, we know these big broad strokes.... It’s just now about filling in those lines in the details. We’re pretty excited about where it’s potentially going to go. Again, like we said, it’s going to feel very different than this season. But I think that’s the right thing to do and I think it’ll be exciting.”

At the end of Season 3, fans were confronted with (possibly) three heartbreaking deaths: Alexei in the hands of his Russian colleague at the carnival (“It’s not rigged!”), Billy in the tentacles of the Mind Flayer at Starcourt mall, and Hopper in the aftermath of the machine blast in the underground lab. Or not. Fan theories have emerged that Hopper isn’t dead at all, but he may either 1. Be the American held captive at the Russian facility, or 2. Have narrowly escaped the blast by slipping through the door to the Upside Down. With these theories in mind, the possibility of time travel would certainly be an interesting addition to Season 4. Could members of Hawkins AV Club reunite to create the ultimate time traveling machine to prevent the chaotic events in Season 3 from ever unfolding?

The latest season concluded with Joyce, Will, Jonathan, and Eleven moving away from Hawkins. So, there’s now a rift in the party as Mike, Lucas, Dustin, and Max remain behind. Perhaps this rift won’t last very long at all if the past, present, and future depend on it.