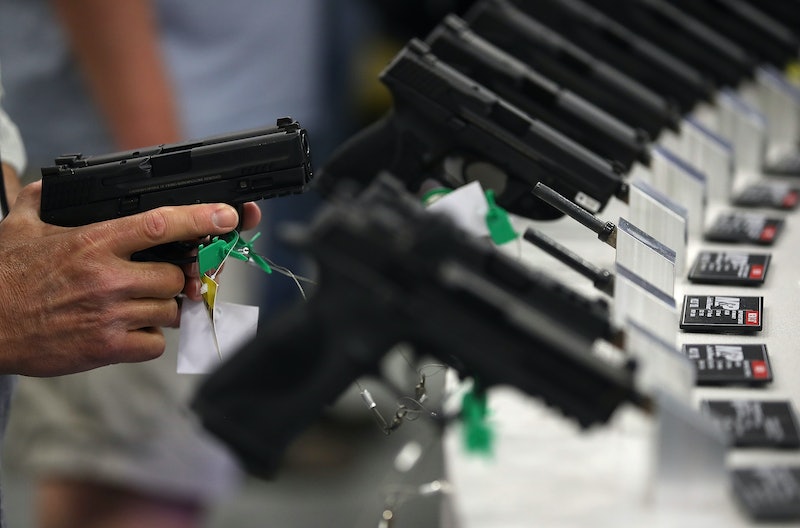 Via the British Medical Journal, a new study on gun laws and mass shootings shows a clear correlation between the two — and the connection might not surprise you. The study revealed that states with stricter gun control measures, as well as lower overall numbers of gun ownership, yielded a lower number of mass shootings than states with loose gun measures and higher gun ownership, from the years 1998-2015. The study doesn't prove a causative link, but it does provide strong evidence that gun safety measures can impact the rate of mass violence in a given area.

Per the study, a 10 percent increase in gun ownership in a given state was connected to a 35 percent increased likelihood of a mass shooting taking place in that state. What's more, the study revealed that an increase in "state gun law permissiveness" (aka the prevalence of looser gun laws in a state) was connected to a higher rate of mass shootings.

The conclusion of the study reads, "States with more permissive gun laws and greater gun ownership had higher rates of mass shootings, and a growing divide appears to be emerging between restrictive and permissive states." The study further stressed that the need for "better data collection" on the topic, as well as the need for further studies in general, were necessary.

To Newsweek, the study's co-author, Paul Reeping, said, "We were surprised most by the growing divergence in recent years of the rates of mass shootings in permissive and restrictive states."

It’s hard to be 100 percent certain that what we found isn't possibly because states that experience more mass shootings in turn change their gun laws, or some other factors that we just couldn’t measure. However, we did include multiple state-level factors that we could measure—education, poverty, incarceration rate, etc.—and took into account a time lag to limit the reverse effect of mass shootings influencing state gun laws across a 15 year period.

Reeping recognized that a study such as the one he conducted will inevitably come across under or over-reporting of data; he cited Alabama as an example, claiming that the state only included a small number of counties for data collection for the study. Reeping said, "Nevertheless, we believe that this under reporting would likely lead to an underestimate of the association that we found, as states with more permissive gun laws appear to be less consistent in their reporting of homicides than states with restrictive gun laws."

According to The Hill, a hearing on gun laws will actually be taking place quite soon: On March 26, the Senate Judiciary Committee will hold a hearing that focuses on "red flag" laws, the publication reports, which are the laws that allow authorities to take away guns from individuals they deem dangerous under the law. The hearing will be limited in scope, but as The Hill notes, it is a small step in the direction of more gun regulations, given that the Senate is GOP-controlled and Republicans have traditionally been more hesitant to support gun control laws.