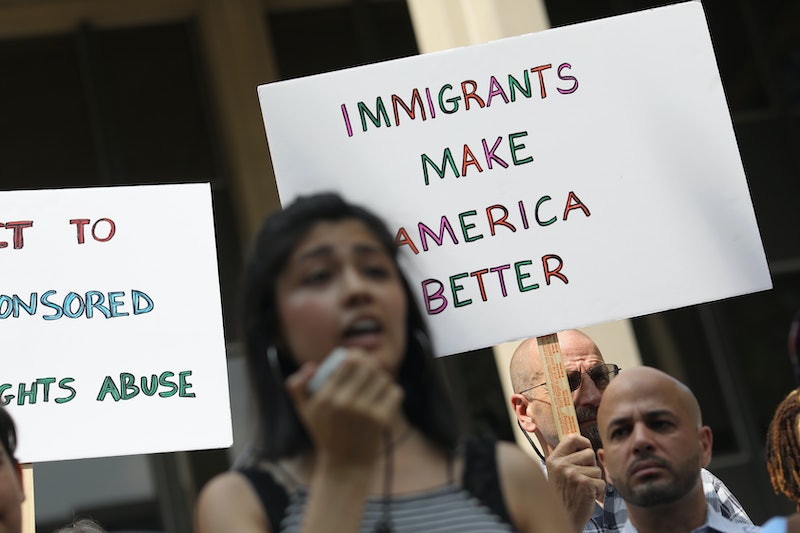 Over the years, researchers have shown that there is no causal link between immigration in general and crime rates. A new study reaffirmed that despite what Trump has claimed, the same is true for undocumented immigration. On Monday, The Marshall Project, a nonprofit journalism organization, and The New York Times' "The Upshot" released a study on crime rates and undocumented immigrants in metro areas, and it directly contradicts one of Trump's most troubling claims.

Most importantly, the collaborative study asserted that undocumented immigration wasn't connected to higher crime rates. Methodology-wise, The Marshall Project and The New York Times' Upshot conducted a comparison between two sets of numbers dating back to 2007: local crime rates in metro areas compiled by the FBI and Pew Research Center's data on undocumented immigrant presence in those areas.

Between 2007 and 2016, the nonprofit revealed that there had been an actual decrease in violent and property-related crime incidents. Even when the organization created separate crime categories — from larcenies to theft and robberies — it revealed that the increase or decrease in undocumented immigration had no influence on the area's crime rate.

Murder was the only category to see an increase in incidents, although the study left it numerically unspecified. Nonetheless, Marshall Project's senior data reporter, Anna Flagg, noted that the increase was "small and uncertain" and as a result, "effectively zero."

The Marshall Project study debunks one of Trump's go-to talking points about undocumented immigrants in the United States. During his State of the Union (SOTU) address this year, the president claimed, "Year after year, countless Americans are murdered by criminal illegal aliens."

The president's claim was swiftly debunked by CNN in February, which referred to the libertarian think tank Cato Institute's study from 2018. In its paper, the think tank noted that both legal or undocumented immigrant populations were less likely than American citizens to be convicted of violating the law. Flagg wrote that, among other things, being arrested could lead to deportation for an undocumented person, and a possible return to the dangerous conditions many asylum-seekers attempt to flee.

Even before Trump's SOTU address, NPR pointed to four separate studies in May 2018 that collectively debunked Trump's rhetoric about immigrants and crime spikes in general. In other words, academic research has consistently poked holes in Trump's remarks that immigrants are harbingers of crime.

The Marshall Project's study also gives its readers the opportunity to learn about what factors could actually be associated with higher crime rates. Things like unemployment rates, lack of stability in accessing affordable housing, and poverty were better parameters for understanding why a metro area may have more crimes committed in it, according to the paper. Undocumented immigrant presence was not one of those indicators.

Ultimately, the impact of immigration was positive, according to the study. Flagg pointed to University of Buffalo professor Robert Adelman's thoughts on immigration. Immigrants, Adelman told Flagg, were more likely to bring economic enrichment and benefits to the new communities they turn to, not crime.