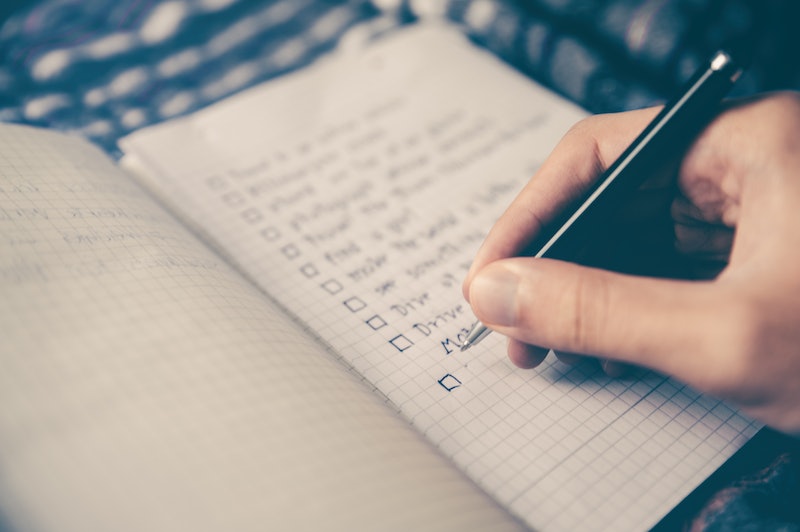 If you’re still looking for things to do this summer, you need to start by checking out this teen’s summer bucket list that’s gone viral. It’s part nostalgic, a tiny bit cringe-y, and all-around incredible. According to the original poster who shared the list on Twitter, this time capsule of teenagedom was found in an Urban Outfitters dressing room. Apologies to the original list maker, whose lost list has found its way into hearts across the internet. Your sacrifice to the cause of bringing us all back to what summers were like as a teen has not gone unnoticed.

The list entitled “Summer Bucket List 2017” has a total of 41 items on it, a handful of which are already checked off. To-dos range from “get a pedicure” to “go to the beach” to “[hook up] with Jason (again).” That last one had already been completed as denoted by the checkmark next to it. Also, if you don’t relate on an emotional level to that parenthetical “again,” did you even go to high school?

Some other iconic items on the list include, “buy seven bikinis” and “eight hoe pics for Instagram” as well as “give two blow jobs.” The specificity in numbers is killing me. The list also has more practical items to check off like “decorate room,” “do summer reading,” and “fix home screen.” But you gotta balance work and play as evidenced by item number seventeen which reads, “get drunk all the time” and is marked off as completed.

Now seems like an appropriate time to remind everyone, teens included, to be safe and smart when it comes to things like sex and getting “crossfaded 17 times,” as per number 18 on the “Summer Bucket List 2017” suggests. And yes, I did have to Google “crossfaded” to make sure I knew what it meant. (To be clear, I definitely knew but just, like, wanted to make sure.)

And while I can’t condone underage drinking or drug use, the idea of writing down “risque” to-dos on a list (but never actually doing any of them) is something high school me most certainly was into. I doubt my lists were ever quite as ambitious as this one, though. They were likely more along the lines of “stare at the hot lifeguard five times without getting caught” and “look up what ‘blow job’ even means.”

The whimsical items on the list, like “tie a message to a balloon and let it go” and “pet a giraffe,” have transported my spirit back to sophomore year of high school. So, if you need me, I’ll be reachable by AOL Instant Messenger and the Nokia brick phone I share with my family and can only use in case of emergencies.

Some items on the list will forever remain a mystery. (What/where is this “randyland” that item number 16 speaks of?) However, the mishmash of mundane and more memorable things on this list is all too familiar. Like, how can you read “eat cotton candy” on this list and not immediately become nostalgic for a time when eating cotton candy was of such importance that it required writing down. This list is a classic coming of age tale and should be required reading for every adult who has forgotten what it’s like to be a teen.