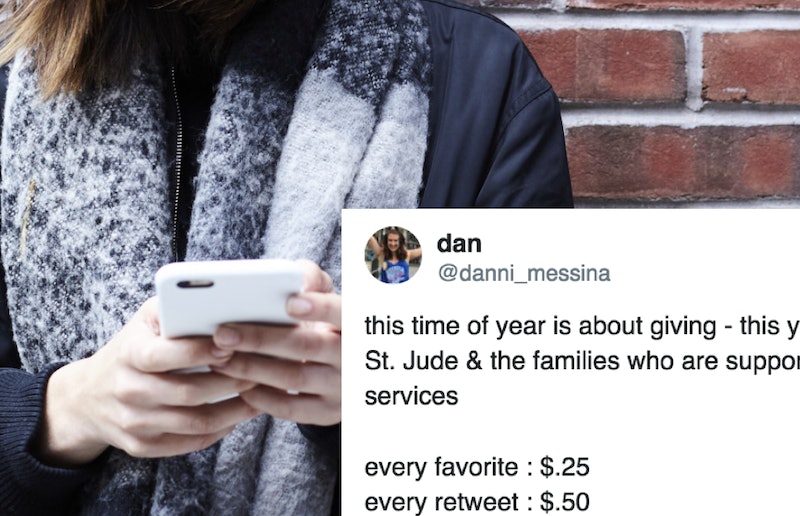 'Tis the season for giving; and one Washington State University student is trying to give back in a big, big way, thanks to a viral tweet that went awry. Danni Messina vowed to donate money for charity every time people shared her tweet; but she was in for a very expensive awakening when the tweet blew up, committing her to donating way more cash than she has. Bustle reached out for comment and got to chat with her more about how it all went down.

Messina was initially inspired to do a good deed after learning a friend would be in the hospital with his grandmother for Thanksgiving. Speaking to Buzzfeed News, she says, "It hit me that a lot of kids have the reality of having to be in the hospital with their families. I feel so fortunate that I have everything I need. There are so many other families that need so much more. I wanted to give back this holiday season." Messina decided to take her generosity to Twitter, where she posted saying every time someone liked or retweeted her tweet, she would donate money to the St. Jude Children's Research Hospital, hoping that her small group of followers — friends and sorority sisters — would join in.

She was in for a surprise when the tweet went viral, quickly adding up to tens of thousands of dollars in her own donations.

Messina had planned to donate around $1,000. If my math is correct (it's a toss-up), at this moment, all of her likes and retweets add up to nearly $206,000. "It all really happened overnight on Saturday to Sunday. I realized that there were so many people retweeting it, and it wasn't stopping!" she tells Bustle.

Panic set in, understandably; but even though she knew she couldn't foot that bill, she was still committed to raising money for the hospital. Messina then set up a GoFundMe page, and donations are amassing by the hour. At this time, she's raised about $7,500, with a goal of $50,000, and its only been one day. Now, she's making headlines for the one insane tweet that started it all, and how she's channeling her efforts into a crowdsourcing campaign where everybody can pitch in and try to do something nice this holiday.

Messina's actions are heartwarming, but she didn't necessarily have it easy. After learning that she couldn't follow through with her initial promise, tweeters of the world had things to say, mean things, going so far as to say that she only did it for the attention and had no real desire to help.

Messina promises that her intentions were only good, though, and she doesn't plan on letting the negativity get her down. Speaking to Bustle, she says, "I would have to say to just keep the positivity up. It's for a great cause. I really didn't do it for 'Twitter fame' or anything like that. I did it because I wanted to give back this holiday season. I love St. Jude with a passion and I want to give the most I can!"

It's a smart choice indeed, especially considering this whole thing is about so much more than Messina or her tweet: it's about raising money for people in need.

Despite all the naysayers and Debbie Downers, Messina has more supporters at her back than critics. Many didn't hesitate to jump to her defense and stand up for her actions.

For every hater, there's probably 20 lovers; and Messina's initial goal wasn't lost just because the dollars signs stacked up to far more than she ever thought possible.

One little tweet ended up having a bigger impact than Messina ever thought it would; and as a result, she's leaving an even stronger positive imprint. Not only is a heck of a lot more money being raised for people who really need it, but she — along with many others on Twitter — have helped bring awareness to something important that we so often push out of our minds. Messina's goal was to give back this season, and she certainly is. Christmas for the people of St. Jude just got a little bit brighter.