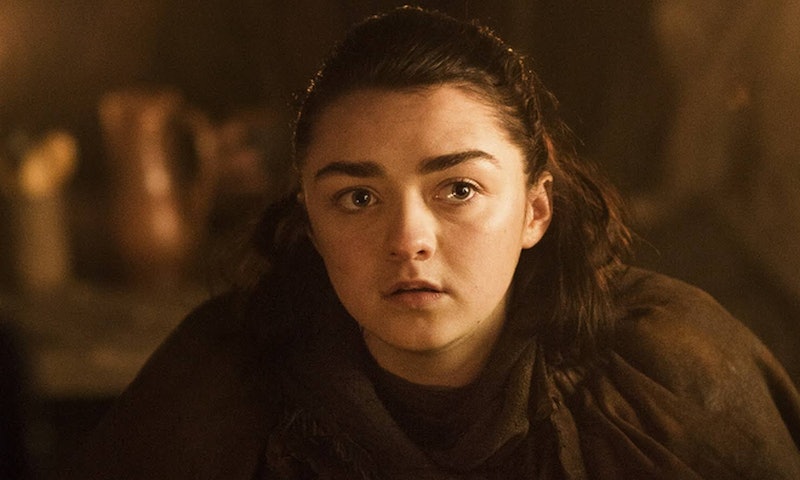 Fans are probably still trying to process that savage act of revenge that Arya laid down on house Frey in the Season 7 premiere of Game of Thrones. Girlfriend scratched a truly abhorrent name off of her infamous list in one satisfying moment. But one of the biggest bads still on Arya's lengthy list is newly crowned Queen of the realm, Cersei, who has been failing to outrun that prophecy that Maggy the Frog told her of when she was young. You know, the one that says her little brother will kill her. Here's the thing, Arya may be able to kill Cersei on Game of Thrones while still fulfilling that prophecy.

I think a lot of fans would be psyched to see Arya actually complete her to-do list. After all, nobody got placed on that list by accident. Of the people left on it, Cersei certainly caused a lot of damage to Arya's life, be it directly or indirectly. Seeing the youngest living Stark use Walder Frey's own face to kill his entire house got me thinking about the other possibilities that this face swap business could possibly present in the future. Couldn't Arya potentially use someone else's face to get close enough to kill Cersei?

Cersei has been living her life and playing her cards almost exclusively to avoid the prophecy that was laid upon her by Maggy the Frog when she was young. In the clip above, here is what Maggy said when baby Cersei asked about her future children.

"Gold shall be their crowns and gold their shrouds. And when your tears have drowned you, the valonqar shall wrap his hands about your pale white throat and choke the life from you."

So, it's important to note that so far the prophecy has been pretty dead on. All three of her children had golden crowns and all three of her children died, and were laid to rest with death shrouds. This is also likely why Cersei made the surprising decision to burn Tommen's body after he killed himself over Margaery's death. No golden shrouds for that boy (although, he did die wearing a golden robe). This is just another example of Cersei making any move she can to prove the prophecy wrong. So, what is that last portion? That last part of the prophecy says that after all of her children are dead, the valonqar will choke the life out of her. In High Valyrian, valonqar translates to "little brother." Hence her hatred for her little brother Tyrion.

Unfortunately for her, Jamie happens to be Cersei's little brother as well. They are twins but the books specifically say that Jamie was born holding on to Cersei's foot. This makes the valonqar prophecy fit for both Tyrion and Jaime. I'm a big believer that Jamie will be the one to kill Cersei, either to save her from herself (because let's be honest, she just fully committed to Mad king Aerys' "burn them all" shtick), or he will kill her out of no control of his own. Yes, I am talking about Arya killing Jamie and using his face to kill Cersei, the same way she used Walder Frey's face to off his entire house. Arya still gets to complete her list and the prophecy of doom still remains technically accurate.

Nothing is ever simple in Game of Thrones, and I think this has enough complexity to fit the bill. Arya is on her way to King's Landing right now with the intention of killing Cersei, and although Jamie is known to be a legendary warrior, he is not living his best life with a golden sword hand. Through her training with the Faceless Men, Arya has obtained the skills to spar on his level. Once she gets past the killing Jamie part, he is the one that Cersei likely trusts the most, so it would be easy to get to her from there.

Cersei better watch her back. The new Queen's days are most likely numbered.