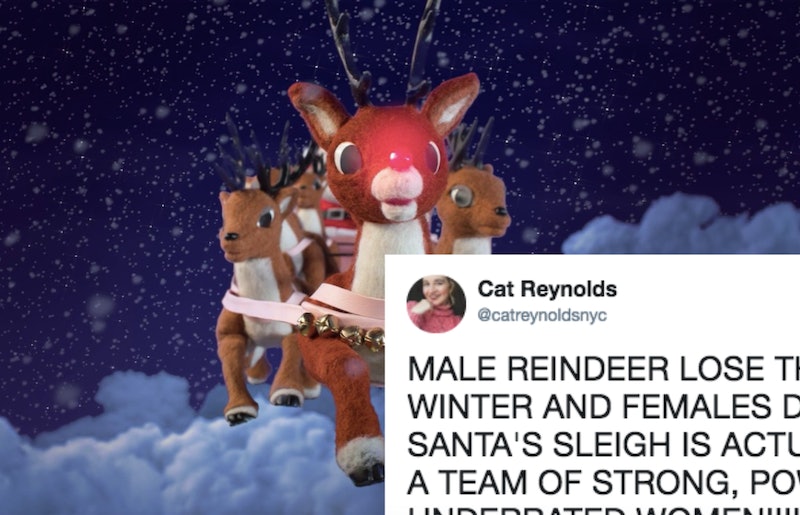 You don't have to be a Christmas fanatic to know Dasher and Donner and Prancer and Vixen, or Comet and Cupid and Donner and Blizten. (Obviously, everyone knows Rudolph.) But memorizing the names of Santa's hardworking team doesn't mean you're bosom buddies — and as one woman's theory about Santa's reindeer shows, you may not know the reindeer nearly as well as you think. Prepare to have your minds blown, kiddos, because the famous red sleigh might be pulled by a group of (literally) strong, powerful ladies. So... where is the gender-bent Rudolph the Red-Nosed Reindeer reboot? Netflix, I'm looking at you.

Traditionally, the reindeer pulling Santa's sleight through the night sky have been depicted as a team of brawny reindeer dudes. Surely female reindeer would find it too difficult to see through their massive, fluffy eyelashes into the driving snow each Christmas, right?

Wrong. (Duh. Otherwise, would the women of the internet be reading this article?) On Monday, Fordham University undergraduate Cat Reynolds dropped a holly jolly truth bomb on Twitter when she pointed out that Donner, Blizten, and company couldn't be male. Adult male reindeer shed their antlers in the winter, while females do it in the summer. Since Santa's reindeer are always shown hauling their bearded burden through the snow with antlers, they're probably a team of women.

"MALE REINDEER LOSE THEIR ANTLERS IN WINTER AND FEMALES DON'T THEREFORE SANTA'S SLEIGH IS ACTUALLY PULLED BY A TEAM OF STRONG, POWERFUL, UNDERRATED WOMEN!!!!! YOU GO, GIRLS!! I SEE YOU!!!"

Needless to say, this kind of revelation didn't go unnoticed. Her tweet has been retweeted more than 180,000 times, and it has garnered more than 609,000 likes.

Most people were stoked to hear that Santa's cervine helpers may actually be a lineup of ladies.

And yet a surprising amount of Scrooges were displeased with the idea. Some took it upon themselves to remind everyone that (spoiler alert!) Santa and his reindeer aren't real, while others did some quick Googling and pointed out that castrated male reindeer can shed their antlers around the same time as females.

One might wonder why they care so much about raining on a fictional concept's parade, but if there's anything to be learned from the Internet, it's that people love doing exactly that.

So what's the actual, scientific answer? As it turns out, both theories could technically be correct. Reindeer are unique among deer in that both males and females have antlers, as opposed to only the males. Their cycles vary depending on gender and age; a young female reindeer won't grow new antlers at the same time as an older male.

Wildlife biologist Imogene Cancellare told Inverse that male reindeer shed their antlers in late autumn, long before the night Santa makes his ride through the skies. Meanwhile, females hang on to theirs until after their calves are born in the spring. At the same time, female reindeer have a much higher body fat percentage than males, making them better able to weather the weather on Christmas Eve. Cancellare concluded, "Not all female[reindeer] have antlers, but for Santa’s crew to have antlers in December, they would be females."

Before you declare the case closed, though, there are some other possibilities. Young male reindeer shed their antlers in the spring with the females, so Santa's team might be staffed by a bunch of young 'uns that are rotated out every year. Castrated reindeer, which are more biddable than bulls, are often used to pull sleds, and they have a cycle similar to females'.

Basically, it's up to you to choose from the possibilities. Do you want to think of the reindeer as castrated males? Females? Young adults drafted into a seasonal job until they're cruelly discarded? Until the reindeer send Rudolph to clear things up, only you can decide.

More like this
Here’s How To Make The Spotify Music Festival Lineups Taking Over Instagram
By Alexis Morillo
You Can Save Up To 40% Off On TikTok’s Favorite Products This Black Friday
By Kristine Fellizar and Alexis Morillo
How To Use TikTok’s Voice Filters To Sound Like A Cat, Robot, & More
By Alexis Morillo
15 Gifts That Bring Your Faraway Loved Ones Closer During The Holidays
By Kaitlin Marks
Get Even More From Bustle — Sign Up For The Newsletter