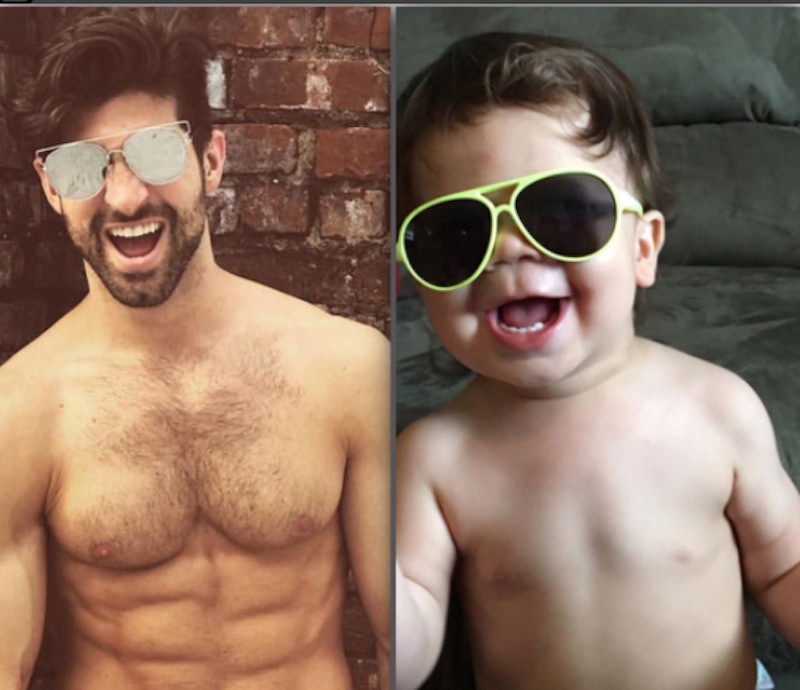 The internet has given us so much. From tonsil removal videos to anonymous eggplant mail, the internet never (and always) disappoints. I personally like browsing cute pictures of babies to pass the time. I also enjoy feasting my eyes on the occasional male model. I usually have to go to separate profiles to see babies and babes, so you can probably imagine my excitement when I stumbled upon the babyandthebody Instagram profile. This profile created by Katina Behm combines two of my favorite internet pastimes into side-by-side photos.

The baby in the babyandthebody pictures is Behm’s 18-month-old son, Augie. The body is Aristotle Polites a New York-based model and Behm’s kid brother. Serendipity is to thank for this now viral Instagram profile. A couple months ago, Behm couldn’t get Augie into a plaid shirt. The shirt stayed stubbornly around Augie’s neck like a scarf. Behm, who find’s her brother’s modeling career hilarious, took a picture of her son and later thought that there would be a similar picture of Polites on his Instagram profile.

“The image of him with the shirt undone and his bare chest exposed made me laugh because he looked like he belonged on the cover of a romance novel,” she told HuffPost. “I took a picture and then realized I bet my brother Aris has a picture just like this on his Instagram page which is filled with modeling photos.”

Behm was right. Polites did have a similar photo and the side-by-side comparison was cute and funny. Behm shared the first picture with her family who adored the comparison. After the positive response from family, Behm decided to showcase similar pictures featuring her baby and her brother on Instagram. Thus, babyandthebody was born.

Even Behm’s grandmother is in on the fun. The 88-year-old doesn’t have an Instagram, but she gets a personal email from Behm each week with the latest photo. When asked, “Who wore it better?” Grandma always chooses Baby Augie.

The page currently has over 50,000 followers who check every Monday to see a new picture of Augie and Polites. Behm’s posts of her man crushes receive thousands of likes and dozens of comments. One commenter wrote: “Baby boy > model brother. Adorable stuff!” Another said: “Sometimes we wonder if it’s not the big brother that’s imitating the baby!”

You may think Polites would be jealous of his nephew’s internet fame — after all, babyandthebody has a larger following than Polites on Instagram. But Behm says he approves of the fun profile. Polites’ latest post is a repost from babyandthebody, a side-by-side of the duo shirtless and looking up to the camera.

“I’m so proud of him because he’s out there doing his thing and following his passion, but it’s hard not to rip on him a little bit,” Behm told HuffPost. “Some of his modeling pictures are hilarious, but he doesn’t take himself too seriously which is good because I get such a kick out of recreating them with Augie.”

Augie likes taking pictures too. The toddler gets excited when they go to take pictures after not taking them for a few weeks.

What started out as a joke among family has elevated Augie’s and Polites’ public image. Who knows? In a few years, Augie could discover he wants to follow is his uncle’s footsteps and become a model too. He’ll have a very diverse portfolio by then. And with an uncle already established in the modeling industry, Augie may just be the next heartthrob gracing the cover of GQ.