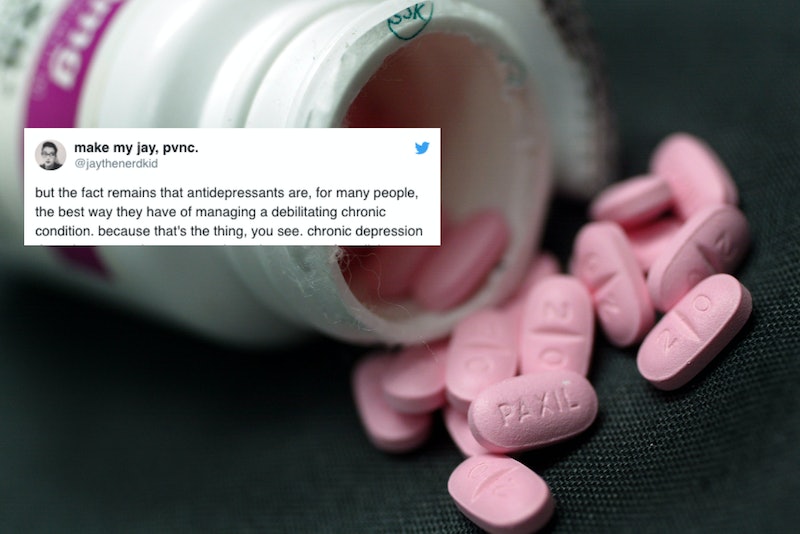 When my psychiatrist first recommended antidepressants and anti-anxiety medication to me, I felt like I'd been given a second chance at life. Although medication has helped me greatly, anyone who's taken medications for their mental health knows that there are unfortunate side effects that can sometimes accompany relief. A recent report from The New York Times discusses the possible complications of antidepressant withdrawal, and it sums up a lot of what I wish I knew before taking antidepressants. However, many on social media have noted how focusing on the potential side effects of medication can perpetuate a toxic myth about antidepressants — that the risks outweigh the benefits, when, for many people, the reverse is true.

"Many people worry about the stigma of having a mental health disorder as well as the fear of a 'chemical' changing or altering their brain," Patricia Allen, a psychiatric mental health nurse practitioner and the executive director of medical services for Summit Behavioral Health, tells Bustle. "This perception often influences the individual’s willingness to take a psychotropic medication. In reality, the medication is stabilizing one’s neurotransmitters," she says. We're worried about being judged for taking mental health medications, which is why it's so meaningful when public figures open up about their treatment plans, as Mariah Carey did when she revealed she lives with Bipolar II.

Withdrawing from an antidepressant, especially if you aren't aware of the side effects, can feel hellish. I've been taking benzodiazepines, such as Klonopin and Ativan, for years, and I feel terrible if I forget a dosage of the medication. The only time I've tried to taper off my medication, I experienced anxiety so severe I ended up spending five days in a psychiatric ward. I understand the danger of these side effects firsthand — if I get pregnant, I'll face higher risk because of the medication I'm taking, but I had no idea they were unsafe for pregnancy until my husband and I first started thinking about conceiving.

WebMD says some common side effects of anti-depressants include nausea, weight gain, loss of sexual desire, fatigue, insomnia and dry mouth — many of which I've experienced firsthand. But, because of these same medications, I'm able to be left alone without anyone worrying that I'll try to harm myself. When I encounter a stressful situation, I don't immediately start thinking about ways to end my life. My medication has, without a doubt, saved me.

Allen points out that patients who are prescribed medication are often desperate for a solution. "Depression and anxiety can be very difficult, together they can be devastating. Depression robs a person of self-worth, purpose, and joy sometimes to the point of losing the will to live," she tells Bustle. "Anxiety can be paralyzing, to the point that the person cannot work or function at home or socially. The above are just a few of the reasons why many people accept the potential risks for the hope of medication giving them back their life."

My medication has, without a doubt, saved me.

It took me two years to find medication that worked for me without discouraging side effects, and I can't gloss over the fact that antidepressants aren't effective for everyone. They aren't magical pills that are cure-alls, either — every doctor I've seen has recommended a holistic approach to mental health, which includes therapy and lifestyle adjustments along with medication. But for me and millions of other people, life would be unbearable without medication. My current antidepressant causes hair loss and severe night sweats, but my life is also fuller than its ever been.

Let's have nuanced conversations about whether doctors adequately prepare patients for the major life change medication can bring — I knew nothing about the downfalls of medication until I researched it myself. But I'll take nausea and sleep problems over suicidal ideation, and memory fog is much more bearable than constant panic attacks. I wish I'd known that antidepressants would affect my body like they did, but I also wish I'd known how much they'd help me.