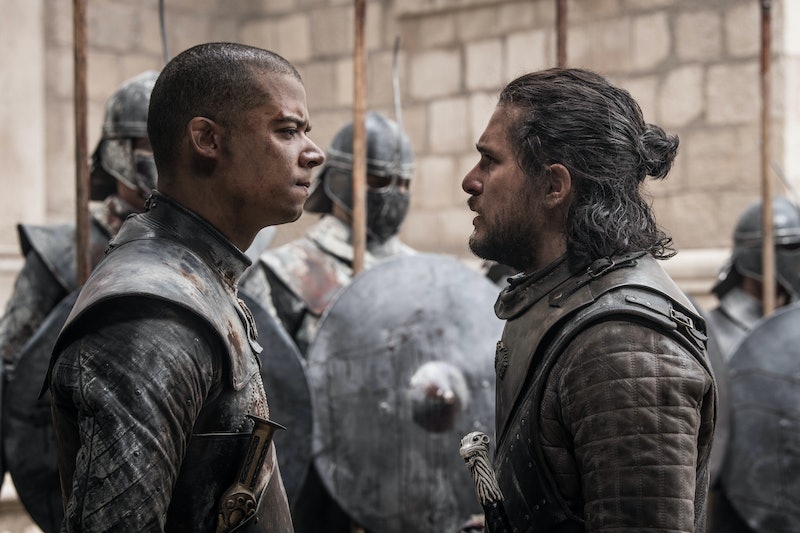 For all those Game Of Thrones fans still wondering what happened to those characters that actually survived the final season, the actor who played Grey Worm has some answers. Jacob Anderson confirmed a Grey Worm theory that will make you afraid of the butterflies, very afraid.

In the Game Of Thrones finale, Grey Worm sailed off with his Unsullied army to the Isle of Naath, which happens to be where his late love Missandei is from. While some might have taken this ending to be a happy one for Daenerys' former right-hand man who promised Missandei they would go there once Khaleesi was on the Iron Throne, a new GoT fan theory gives Grey Worm a more tragic ending.

The theory goes that Grey Worm does get to Naath, with its white beaches and tall trees, with the intention of protecting Missandei's people and living a more peaceful future. But not everyone or more accurately everything is happy to see Grey Worm and his army. According to the theory, Grey Worm will be killed by butterflies, animals that might not sound all that menacing if it weren't for the fact that Naath's butterflies are straight-up killers.

In the original series by George R.R. Martin, those born and raised in Naath are immune to the deadly butterflies, which are described by the Game Of Thrones fandom wiki as "a large species of butterfly on Naath is a carrier for a horrific disease that makes the flesh literally slough off of a man’s bones." Foreigners are unfortunately not immune, which puts Grey Worm and his men at risk of catching "butterfly fever."

According to the books, "the Naathi say none maintained a presence on the island for more than a single year.” And it seems that's what happened to Grey Worm, if you believe Anderson.

In an interview with Insider, Anderson was asked about the theory that Grey Worm is killed by butterflies and decided it's probably the best ending for his character. “Yeah but that’s a book thing. It’s not in [the] show," Anderson started out telling Insider, before changing his mind. "I mean, actually, do you know what? I want to spread [the word] that [creators] David [Benioff] and Dan [Weiss] told me that that’s real. Yeah, quote me. What actually happens is Grey Worm dies a horrible death by butterflies.”

So, see, fans heard it straight from the Unsullied soldier's mouth. Of course, for those hopeful fans, it's possible that this will not be Grey Worm's fate in the books since as of right now, he's still alive and well, and nowhere near Naath and its butterflies.

Right now, in the books, Grey Worm not nearly as powerful as he ends up becoming in the show. While a member of Dany's army, he's still working his way up the military ladder. But, Anderson is all for Grey Worm's transformation from heroic soldier to Jon Snow's enemy. “Grey Worm just turned into a jerk at the last minute, he turned into the villain," Anderson told RTE at the MTV Movie & TV Awards. "I kind of enjoyed it, that's fun."

Unfortunately, he might pay for his evil ways. Seriously, Grey Worm whatever you do, stay away from the butterflies.