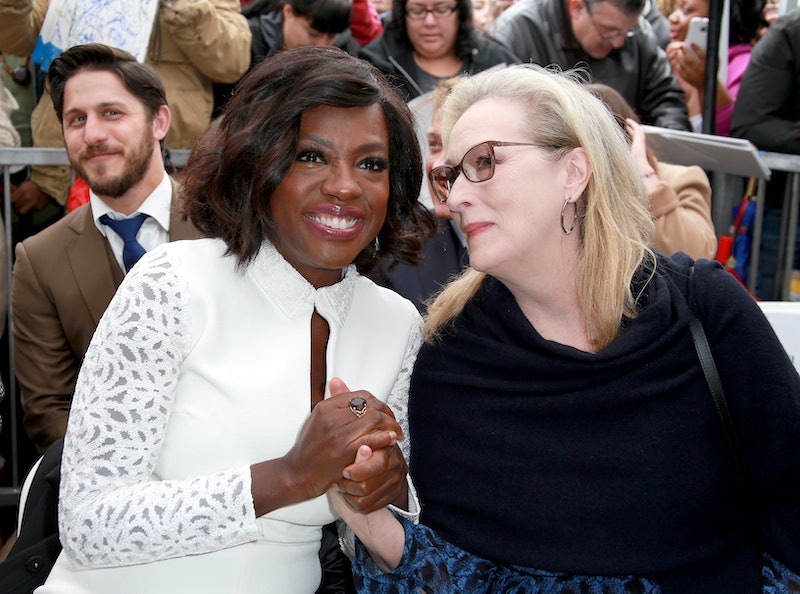 In a night of special moments, a highlight of the 2017 Golden Globes was Viola Davis' speech about Meryl Streep when it came time to present the legendary actor with the Cecile B. DeMille award. Davis truly captured Streep's power as an actor, putting into words what so many of Streep's fans feel when she comes on screen.

She also put into words what it means to be Streep's friend, and what it means to women and to fellow female actors to see Streep playing such a commanding role in Hollywood. "You make me feel that what I have in me — my body, my face, my age — is enough," Davis said, looking her friend and colleague in the eye as she did so. It is truly inspiring to see how Sunday's Golden Globes paid tribute to established female actors like Davis and Streep.

Here's all Davis had to say about her peer, and friend, Meryl Streep.

She stares. That's the first thing you notice about her. She tilts her head back with that sly suspicious smile and she stares for a long time. And you think, "Do I have something in my teeth or does she want to kick my ass?" which is not going to happen.

And then she'll ask questions. "What did you do last night Viola?" Oh, I cooked an apple pie. "Did you use pippin apples?" No, I didn't use Pippin apples, what the hell are Pippin apples? I used Granny Smith apples. "Did you make your own crust?" No, I used store bought crust, thats what I did. "Then you didn't make an apple pie, Viola."

"Well, they don't taste right unless you use ham hocks. If you don't use ham hocks it doesn't taste the same. So, how's the family."

And as she continues to stare, you realize that she sees you and, that like a high powered scanning machine, she is recording you. She is an observer and a thief. She reveals what she has stolen on that sacred place which is the screen. She makes the most heroic characters vulnerable, the most known familiar, the most despised relatable. Dame Streep.

Her artistry reminds us of the impact of what it means to be an artist, which is to make us feel less alone. I can only imagine where you go, Meryl, when you disappear into a character. I imagine that you are in them, patiently waiting, using yourself as a conduit, encouraging them, coaxing them to release all their mess, confess, expose, to live. You are a muse. Your impact encouraged me to stay in the line, Dame Streep. I see you. I see you.

And you know, all those rainy days we spent on the set of Doubt, every day my husband would call me at night and say, "Did you tell her how much she means to you?" and I would say, nah, I can't say anything, Julius. I'm just nervous. All I do is stare at her all the time, and he said "Well you need to say something, you been waiting all your life to work with this woman, say something." I said Julius, I'll do it tomorrow. "OK, well you better do it tomorrow because when I get there, I'm gonna say something." Never said anything. But I'm gonna say it now.

You make me proud to be an artist. You make me feel that what I have in me — my body, my face, my age — is enough. You encapsulate that great Emile Zola quote that if you ask me as an artist what I came into this world to do, I as an artist would say, I came to live out loud.

It is a fitting tribute to a remarkable talent. And of course, Streep's acceptance speech, which touched on our current president elect, did not disappoint. All in all, the presentation of the Streep's award was one of the most important moments of the night.

More like this
We’ve Entered The Hot Boy Reader Era
By Samantha Leach
Jessica Simpson On The Time She Was Pursued By A Backstreet Boy & An *NSYNC Member
By The Editors
Everything To Know About The 'Daisy Jones & The Six' TV Series
By Maxine Harrison and Brad Witter
Twitter Is Identifying With Sally Field & Jane Fonda’s Friendship In New Viral Video
By Jake Viswanath
Get Even More From Bustle — Sign Up For The Newsletter
From hair trends to relationship advice, our daily newsletter has everything you need to sound like a person who’s on TikTok, even if you aren’t.