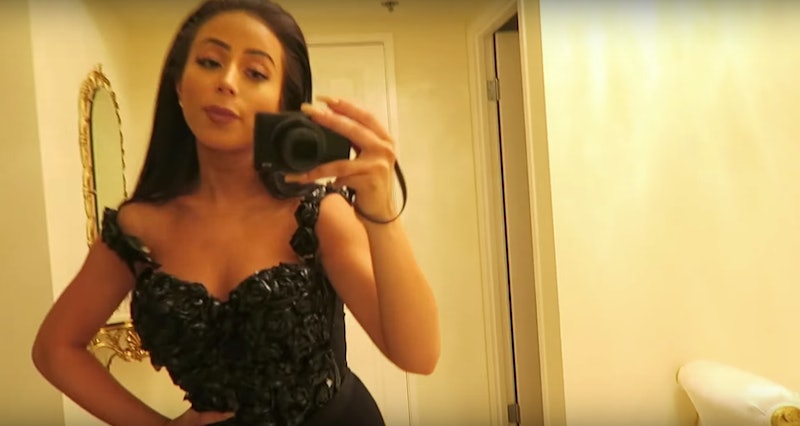 There's no need to stress out and spend hundreds of dollars on a gorgeous prom dress. Sometimes all you need are some trash bags, craft supplies, and the right attitude to look like a diva, according to Amber Scholl in Los Angeles. For the unbelievers, please turn your attention to the 24-year-old YouTube sensation, who made a trash bag prom dress DIY video that could put store-bought dresses to shame. Scholl, who makes videos about how to make "life luxurious on a dime," was asked by her viewers if she could do a DIY prom dress video.

Her subscribers may not have been expecting a prom dress made out of black garbage bags. But Scholl's sheer, hip-hugging gown proves yes, you can wear literal trash bags and still look fabulous. The inspiration for this DIY project came from her YouTube comments. "A comment that I get all the time is this," Scholl says in the how-to video before pointing to a comment that says, "AMBER COULD WEAR A TRASH BAG, and still look bomb." Another commenter replied, "I won't be mad if she made a video about it."

"So, I thought it'd be fun to go ahead and try it," Scholl says before launching into the making of the trash bag prom dress from beginning to end. Bonus: this glorious creation is the perfect clapback to any haters who call you trashy.

The trash bag prom dress went viral and Scholl's video has racked up more than 900,000 views. The black, floor-length gown features a Bardot-style, off-the-shoulder bodice with cinched waist. It's constructed with rosettes made out of Target trash bags. The bottom half is sheer and flairs out slightly, with more black flowers lining the hem. Along with trash bags, Scholl used Scotch tape, duct tape, glue, and a sheer skirt. She purchased a black bodysuit to use as the base.

The video has more than 5,000 comments, with people praising Scholl's crafting skill. "I don't think anyone would have gone this far," wrote one commenter. "Girl you got some patience. A big hats off to you.﻿" Another commenter suggested that Scholl do a DIY toilet paper dress next.

Scroll down Scholl's YouTube channel and you'll see that she's made more than 100 videos dedicated to thrifty fashion, shopping, and home decor. Scholl says on her "About" page that she started the channel when she was broke and that it inspired her to learn how to be bougie on a budget. Although she's not broke anymore, Scholl wanted to share her tips on how to "live your life like the queen you are" — no matter how little you have in the bank account.

This isn't the first time Scholl has flexed her DIY muscles. In another video, she showed her audience how turn a $4 thrift store dress into a "dream prom dress."

The trash bag dress is also reminiscent of another cheap, household supply dress: the duct tape prom dress challenge. In a 2016 video, YouTuber Maddie Ryles shows you how to make a homecoming dress out of duct tape. The company Duck Tape also hosts the Stuck at Prom contest, offering cash scholarships to creative participants who make a dress or tuxedo out of their product.

There's something fascinating about seeing unexpected materials transform into fashion. It's why the unconventional materials challenge on Project Runway resulted in some of the most popular episodes for the series. Who knew you could look so stylish wearing floppy disks or pet supplies or corn husks?

If you're not afraid to get crafty, you might want to look around your house for your next fashion inspiration. As Scholl explains in the $4 prom dress video: “It’s fun to be creative. And you don’t need to break the bank to look fab.”