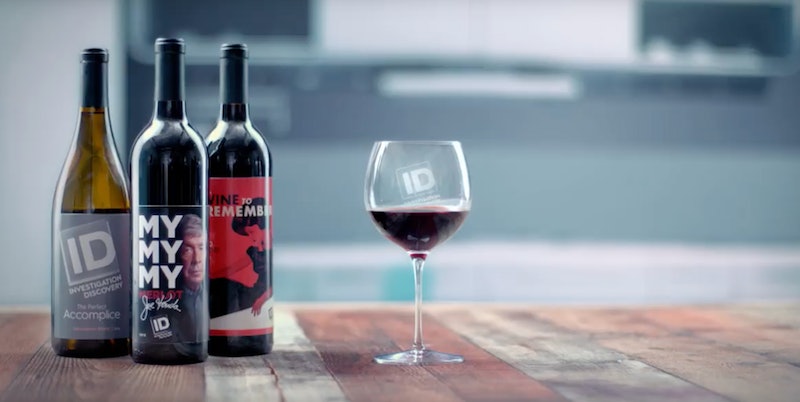 If you've been marathoning The Staircase on Netflix, you can't get enough of everything Investigation Discovery, and the My Favorite Murder podcast is queued up on your phone, there's a new true crime-themed wine club that's a perfect pairing for your dark and twisty obsession. The Investigation Discovery Wine Club understands that sometimes after watching your fave true-crime series — and locking all the doors and windows — you need to chill with a glass of vino. Seriously, why didn't someone think of this sooner?

"Join us on a journey of true crime and true wines unlike any other wine club while watching your favorite ID shows," the ID Wine Club noted on its website. "Every other month you’ll receive an exclusive selection of wines delivered to your door in one specially curated package complete with tasting notes that reveal the facts [and] true stories behind each wine."

When you join the ID Wine Club you'll get an introductory shipment of three ID-Themed Wines and three internationally sourced wines for $49.95, and shipping is included. After the first month you'll be charged $89.95 per shipment, but you can decide how often you want to receive your true-crime inspired wine. For example, you might want to stock up right before a new season of your favorite true-crime series.

Varietals include My, My, My Merlot, inspired by Investigation Discovery's Homicide Hunter detective Joe Kenda, The Perfect Accomplice Sauvignon Blanc, a perfect pairing for when you're deep into The Perfect Accomplice, and A Wine To Remember Red Blend, which ID Wine Club recommends enjoying "in the black [and] white shadows of a lone street lamp," to complement A Crime to Remember.

If you, like me, can't stop watching Criminal Minds, which bases storylines on real-life creepy-AF cases, you need to join this wine club ASAP. And, if you've been hiding your love of true crime from your besties and your BAE, the mere existence of the ID Wine Club proves that true-crime aficionados are far from alone. Psychologist Meredith Fuller told the news outlet Body and Soul that there's a reason why you love true crime, and it actually makes a lot of sense.

"[You] get this precarious pleasure out of something you know can explore because it’s personally very safe. When you’re watching true crime it gives you an opportunity to look at the other side of life, the dark side, but you’re safe in your living room."

However, that doesn't stop you from locking your doors, going down a Wikipedia rabbit hole about the most notorious cases, or hiding a hammer under your pillow like me. Because, when someone crawls in the window, which seems to happen in every single true-crime drama, you want to be ready.

If it's so freakin' scary, why can't we stop watching? While I'm definitely your friend in true crime, not everyone is down with the dark and twisty, and some people seem to have no problem walking away.

Criminal Minds actor Mandy Patinkin, who currently plays Saul on Homeland, made a now infamous bizarre exit from the series after the second season. Basically he left the set one day and never came back. Patinkin told New York Magazine that being mired in the horrific crime stories every day was destructive to his soul. "I’m concerned about the effect it has," he explained. "Audiences all over the world use this programming as their bedtime story." Um, guilty right here. "This isn’t what you need to be dreaming about."

Even if indulging in true-crime shows before bed leaves you feeling unsettled, there might be a psychological reason you keep hitting next on Netflix. "I think people wonder what motivates another person to to commit such horrible acts against another, often a 'loved one,' because we can’t fathom doing such things ourselves," New York Times bestselling author Caitlin Rother is quoted as saying on the blog Hopes & Fears.

"We want some insight into the psychology of a killer, partly so we can learn how to protect our families and ourselves, but also because we are simply fascinated by aberrant behavior and the many paths that twisted perceptions can take."

Actors even study serial killers in preparation playing a villain. Self-confessed true-crime lover Lady Gaga told fellow actor Jamie Lee Curtis in an interview with Actors on Actors that she modeled the Countess in American Horror Story: Hotel after alleged serial killer Robert Durst, whose crimes were the focus of HBO true-crime docudrama The Jinx.

Durst, who had never been successfully prosecuted, was arrested for the murder of his best friend while the show was still airing. Seriously, stop me now because I could go on about true crime forever. Same? The ID Wine Club will be your new partner in crime for your serial killer obsession. Because, let's face it, a good talk (or viewing) about everything diabolical is always better with a glass of wine.