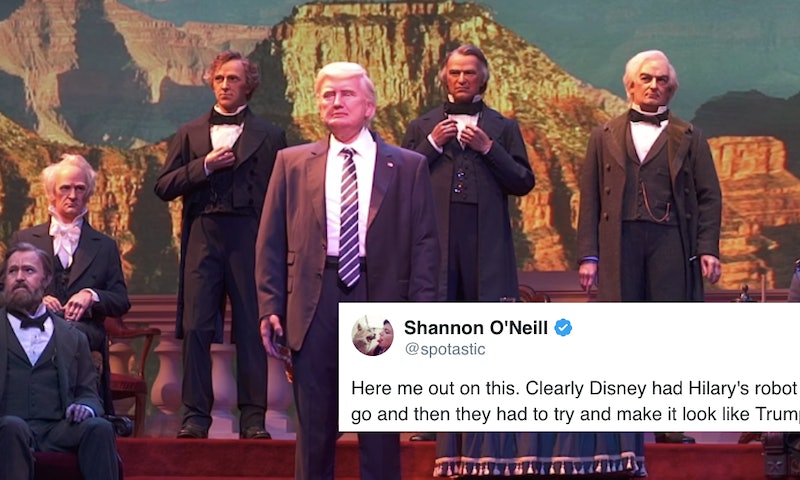 On Monday, an animatronic robot version of President Trump was officially unveiled in Disney's Hall of Presidents at Walt Disney World in Orlando, Florida, and the result was... interesting, to say the least. While a number of recent presidents have been commemorated in the same way, many have talked about how Trump's Disney robot eerily resembles Hillary Clinton.

Although a change.org petition was launched in June, attracting over 15,000 signatures, to keep Trump's robot from having a traditional speaking part, the president himself recorded a brief message of unity that his robot will now recite to visitors during the daily, 25-minute Hall of Presidents show.

"Above all, to be American is to be an optimist — to believe that we can always do better — and that the best days of our great nation are still ahead of us," the Trump robot recites as it stands between likenesses of former Presidents Abraham Lincoln and Ulysses S. Grant.

This uplifting tone is a pretty stark contrast to the violent rhetoric Trump has perpetuated throughout much of his presidency. But of course, most people haven't paid attention to that; they've been too distracted by the Trump robot's appearance.

Some have said that the figure looks like it came "straight from hell." Others have poked fun at the black, terrified stare in the figure's eyes. But perhaps the most interesting theory about the origin of the figure is that Trump's robot was actually intended to be a figure of Clinton, his 2016 election rival, which was then hastily molded to reflect Trump's face at the last minute when he won the election.

If you think this is nothing more than a crazy conspiracy theory, just check out these close-up images of the Trump-bot.

Many people on Twitter have noted just how curiously similar this figure looks to Clinton, from its eyes, to the shape of its head, to its stance. One user pointed out that the robot looks like Clinton wearing a Trump wig. And one user even pointed out that when the image is displayed in Google Images, Google actually suggests that it may be a picture of Hillary Clinton.

Disney representatives haven't weighed in on this theory yet, but given just how blindsided most of the country was by Trump's shocking election win, it definitely can't be ruled out. According to Pew Research Center, many election polls projected that Clinton had a 70 percent of winning, with some as high as 99 percent. Trump himself even admitted at a recent rally in Wisconsin that his campaign was "not looking good" in November, and that he thought election night was going to be "embarrassing."

When the president himself reportedly thought that he would have to concede the race to Clinton the night of the election — though he has since repeatedly insisted that he knew he'd win — it's safe to say that Disney very reasonably could have thought the same thing. But to be fair, crafting presidential robotic figures that walk and talk isn't exactly an easy gig. Some people have noted that none of the presidential figures in the Hall of Presidents look 100 percent like the person they are modeled after.

The mystery of the origin of Trump's robot figure still hasn't been solved, but it has at least given us a lot of really entertaining tweets to laugh at. In addition to the Clinton theory, there has also been speculation that Trump's figure looks more like actor Jon Voight. And there's even another theory that all of the other presidential figures in the exhibit look like they are appalled by Trump's appearance.

Clinton-esque or not, Trump's robot performance in the Disney Hall of Presidents officially opened to the public on Tuesday and will remain there with America's other most memorable presidents for years to come.