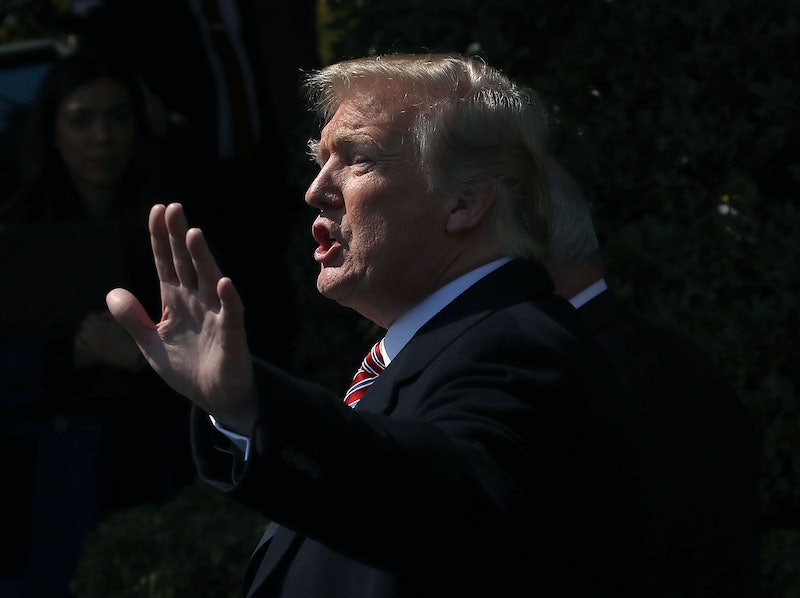 The New York Times has apparently had it with President Trump's accusation-flinging. In an opinion published Wednesday by the editorial board, the nation's "newspaper of record" lambasted Trump for regularly blaming anyone but himself for special counsel Robert Mueller's investigation into Russian interference in the 2016 election. And in the process, the Times gave a new motto to Trump that the POTUS will probably not favor.

After noting the president's comments to the press on Monday night — including his unwearied critique of Attorney General Jeff Sessions for recusing himself from the Mueller probe — the Times let Trump have it. The editorial board posits that the president's motto might be summarized as: "The buck stops anywhere but here."

As evidence, the Times noted that Trump continues to complain about Hillary Clinton, has described the FBI's raid on his lawyer Michael Cohen as a violation of attorney-client privilege, and tries to paint Mueller's team as politically motivated. This is despite the fact that Mueller and Deputy Attorney General Rod Rosenstein are both Republicans and were appointed by Republicans.

The Times goes on to say flatly that the real reason for Trump's angst over the FBI's raid on Cohen is that the president "has a lot to hide."

Though the Times is often critical of Trump, the tone of Wednesday's editorial is notably severe. The penultimate paragraph refers to "grotesqueries" of "Mr. Trump's carnival of misgovernment." While Monday's press conference was meant to focus on recent deadly chemical attacks on civilians in Syria, that's not how the day played out. The editorial board writes, "Mr. Trump instead made it about him, with his narcissistic and self-pitying claim that the investigation represented an attack on the country 'in a true sense.'”

Earlier in the editorial, the Times reminds readers of the many individuals tied to Trump who have come into legal troubles. Amongst them are former campaign chairman Paul Manafort — he's now been indicted — and Trump's former national security adviser, retired Gen. Michael Flynn — who has pleaded guilty to lying to the FBI. Jared Kushner, husband to Ivanka Trump and senior White House adviser to Trump, is also being investigated.

"This is your president, ladies and gentlemen. This is how Donald Trump does business, and these are the kinds of people he surrounds himself with," the board writes.

Given the tone and content of the op-ed itself, the editorial's title — "The Law Is Coming, Mr. Trump" — seems pretty spot on.

And given recent comments by Trump, Mueller's investigation is very much on the president's mind. On Tuesday, Trump tweeted that the FBI's actions in confiscating legal documents from Cohen amounted to a "TOTAL WITCH HUNT!!!" And on Wednesday morning, Trump took aim at the New York Times itself, tweeting that "Failing New York Times wrote another phony story." He was referring to an article that appeared Monday in the paper raising questions about a $150,000 donation to the Trump Organization from a Ukrainian steel magnate.

Trump tweeted that "I was very positive about Ukraine-another negative to the Fake Russia C story!"

Too, there's been new evidence of late that Trump really does want to fire Mueller. On Tuesday, the New York Times (yep, them again) broke the story that Trump wanted to "shut down" the special counsel's investigation in early December. According to the eight sources cited by the Times, Trump's fervor to fire Mueller came after reports surfaced that the special counsel was looking into the president's financial dealings with Deutsche Bank. Once assured by Mueller's team that those reports were false, Trump backed down.

But at his Monday press conference, Trump said vaguely "We'll see what happens" when asked if he was considering firing Mueller. The president also called aspects of the investigation a "disgrace."

In the view of the New York Times editorial board, the true disgrace is Trump and his unwillingness to accept responsibility.