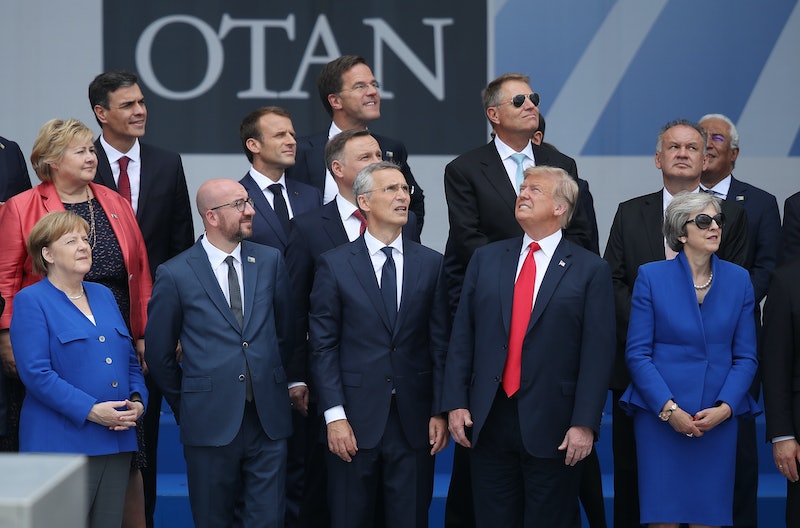 The much-anticipated NATO summit was well underway Wednesday, and people around the globe watched as some of the world's most powerful leaders gathered to discuss international security. But the details of the formal talks weren't the only thing of interest — the interpersonal relationships were just as riveting. And according to body language experts, one photo of Trump at the NATO summit may have said a lot about how the meeting was going.

"What I think is interesting is that it sort of captured how the world sees him," body language expert Patti Wood tells Bustle, referring to a viral photo which showed Trump with an array of NATO heads of government. Virtually everyone in the photo is looking at one direction, whereas Trump is looking the exact opposite way.

However, because it was a posed group shot, Wood underscores that it was important to remember that only the people who were physically there could know what happened before the photo was taken.

"I think it’s captivating because it can become iconic of the way the world is thinking of him right now," Wood says. "He’s not looking in the same direction. And so whatever the cause, he’s not unified with the rest of the people."

In many ways, Trump is, in fact, the odd leader out. He is a reality television star who jumped into politics nearly out of nowhere. And he often makes his own decisions regardless of what U.S. allies have to say. This is especially true when it comes to NATO members, many of which he has recently slapped with significant tariffs, instigating what many experts have described as a trade war.

Despite the tensions, U.S. Ambassador to NATO, Kay Bailey Hutchison told "Fox News Sunday" that the tariffs were not impacting the security-related summit.

"One thing I will say is that in all of the disagreements that we have seen at the G-7 and with allies with whom we are now having trade talks and negotiations and tariffs, that has not come up in the NATO context," Hutchison said. "Our diplomats are professional and they are staying on our NATO issues, where we are 100 percent allied."

But as for Trump's presence at NATO, the way he posed with world leaders suggested that it's possible that the meeting wasn't entirely warm. Of course, it's just a photo, but as Wood says, it could serve to be emblematic.

"The majority of them are looking the same direction," Wood says. "What’s striking is that he’s not only looking in a different direction, he’s looking up. It could be somebody calling his name, but it creates the visual that seems to match up with our perception."

"When observing president Trump's body language, my first initial reaction is one of a man who simply lives in his own world," German tells Bustle. "Other people's opinions do not affect or matter to him. He is facing the opposite direction than everyone else while twisting his upper body. This indicates that he will always follow the beat of his own drum and he like [sic] things to be his way."

Both Wood and German also offered insight into Trump's positioning with British Prime Minister Theresa May, with whom he is meeting alone with later this week, when he travels to the U.K.

"To me, it's just interesting that he's not close to her," Wood says, referring to the noticeable distance between them. "And we don't know who placed him in that position, but he's far away from her."

German suggested that May was keeping a tight rein on her emotions during the photo op.

"The body language of Theresa May is very uptight and reserved," German says. "She is holding on to her folded hands with her right hand slightly squeezing the left four fingers which indicates she is reserved, guarded and not quiet certain of her comfort level among the other leaders."

According to German, that seemed to be a choice she was consciously making. "She keeps her lips slightly closed at the corners which indicates that she is not comfortable to engage with others and prefers to show zero emotion," German says.

Whatever the case, the photo was striking for many, especially on Twitter. And it's only the beginning of Trump's European trip, which means many, many more photo opportunities are on the horizon.