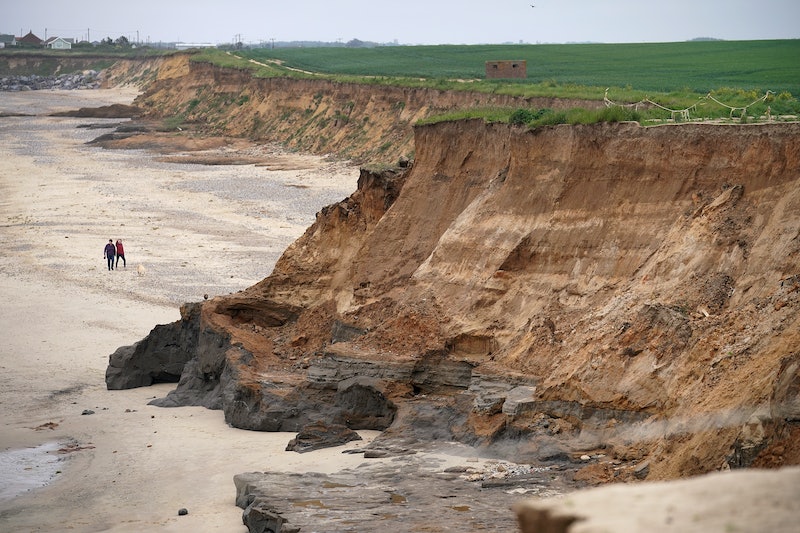 In as soon as 22 years, the world could potentially look unrecognizable if leaders stay stagnant in their climate efforts. On Monday, the United Nations' scientific panel released a stunning report that shows the planet is in worse shape than you may have realized, according to The New York Times. The UN report on climate change makes harrowing predictions for the near future and provides a grim outlook on the far-reaching ramifications.

The report, issued by a group of UN scientist advisers called the Intergovernmental Panel on Climate Change, revealed that tackling the harm already done will mean transforming the global economy at a speed and scale that has “no documented historic precedent,” The Times noted. More than 91 researchers and editors from 40 countries were involved in the report, according to HuffPost, and the document cites more than 6,000 scientific references. The report describes the future, saying that by 2040, the world could likely see even more severe food shortages and wildfires around the world, along with the widespread death of coral reefs.

Much of the report focused on greenhouse gas emissions; the authors concluded that should emissions continue at the current rate, the atmosphere will heat up by as much as 2.7 degrees Fahrenheit (1.5 degrees Celsius) above preindustrial levels by 2040, The New York Times wrote. The result of this rise in temperature would be coastline flooding as well as worsening droughts and poverty.

The report is sobering for its correction of industry expectation; past research had homed in on the damage the planet would see if average temperatures were to go up by a bigger number — 3.6 degrees Fahrenheit (2 degrees Celsius). That bigger number was used because that was the "threshold scientists previously considered for the most severe effects of climate change," The Times reported. Now, that gap is smaller.

“This is one of the most important reports ever produced by the IPCC, and certainly one of the most needed,” Hoesung Lee, the chair of the body, said at a press conference in South Korea on Monday, according to HuffPost. “Climate change is already affecting people, livelihood and ecosystems all around the world.”

Scientists have admitted that the challenge will be difficult to meet; according to HuffPost, in order to keep the world from warming beyond the 2.7 degree threshold, the world would have to "aggressively phase out fossil fuels" to hit net-zero emissions near 2050 or so. World leaders would also have to work together to remove carbon dioxide and other heat-trapping gases out of the atmosphere moving forward, HuffPost noted.

“I see so little evidence that 1.5 is achievable that I think that the main impact of a focus on 1.5 will be to demoralize people,” Andrew Dessler, a climate scientist at Texas A&M University, said in an email to HuffPost Sunday.

Part of that sentiment may come from the Trump administration's attitudes toward the science of human-caused climate change. President Trump has ridiculed it and promised to bring coal burning levels to an even higher level, The Times reported.

This report predicts a frightening future if world leaders don't rein in their country's greenhouse gas emissions, but with the current political chasm and a refusal to believe in climate change effects among those in power, that painted future may already be on the timeline.