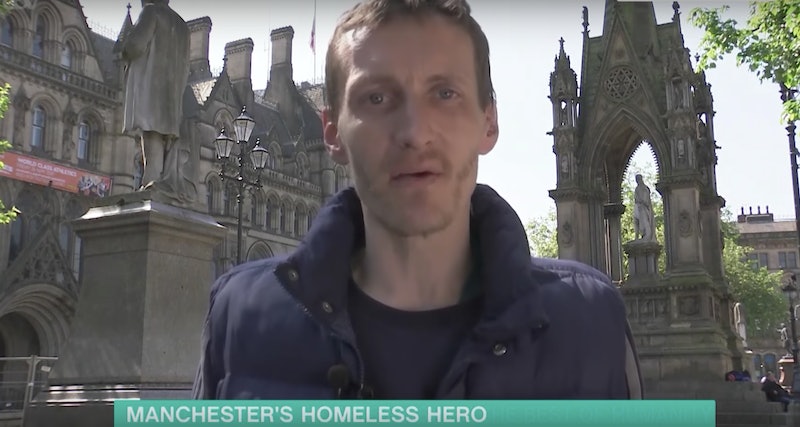 After inspirational details of his selfless actions spread on social media, Stephen Jones, the homeless hero of the Manchester attacks, will be rewarded with a place to live by the end of the week. The home will by provided by millionaire businessman David Sullivan and his son David Sullivan Jr., who took to Twitter to ask for help in finding Jones following news of Jones' heroism.

"Me and dad want to rent the homeless man in manchester a house for 6 months to help him get on his feet," Sullivan Jr. tweeted on the day following the attack. "If anyone can help us get in touch much much appreciated. Such a self-less act needs rewarding. Please tag anyone who can help us." Less than three hours later, he returned to share that Jones had been found, adding, "Shows the power for good social media has. Thank you to all those involved, you have helped change a mans life."

On the day of the attack, Jones, along with another homeless man by the name of Chris Parker, were near the entrance of the Manchester Arena asking passersby for money. When the blast went off, both men initially ran but returned upon hearing the screams of women and kids. Parker used a shirt from the merchandise stand to wrap a little girl’s injuries and held an older woman in his arms as she died; Jones described pulling out nails from the faces and arms of children.

When asked why he chose to run back to the scene of the attack after initially fleeing, Jones responded:

It's just instinct to go and help if someone needed your help. ... It had to be done. You had to help. If I didn't help, I wouldn't be able to live with myself for walking away and leaving kids like that.

Fundraisers were soon set up for both men, with Jones' campaign on JustGiving receiving over $57,000 in donations so far. "I'm overwhelmed by the support and help, and that people have been setting up money for me," he told the Daily Mail. "It's incredible." Representatives for JustGiving have stated that the company is working on making sure all funds raised for Manchester victims go to the correct parties.

The Sullivans received some criticism after photos emerged this week of Jones sitting near a trash can in the rain. In a series of tweets, Sullivan Jr. insisted that Jones was not still homeless and was in fact staying in a hotel until a more permanent living arrangement was finalized, going as far as to call Jones and post a video of the conversation.

To explain the photos, Jones said:

Hopefully Jones will be in his new home and in building a better life soon.