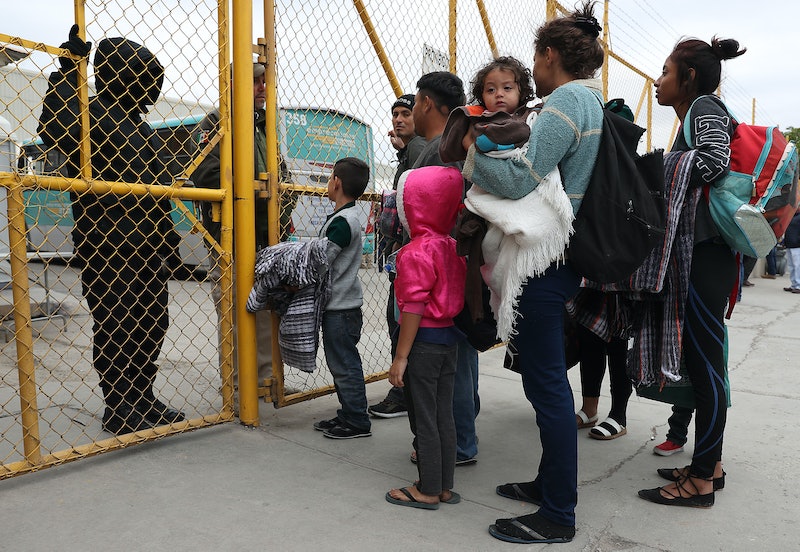 Two weeks ago, immigration authorities began to enforce a new policy that requires some asylum seekers to wait in Mexico while their claims are being processed. NPR and The Washington Post have already reported on migrant families being returned across the border by Department of Homeland Security (DHS) officials. But a new update on Trump's "Remain in Mexico" policy means it's about to face a legal challenge.

On Thursday, the American Civil Liberties Union (ACLU) and the Southern Poverty Law Center (SPLC) teamed up, filing a lawsuit to address the matter in Northern California's District Court. The suit names DHS Secretary Kirstjen Nielsen, as well as numerous Customs and Border Protection (CBP) and Immigrations and Customs Enforcement (ICE) officials. Nielsen has described the policy, officially known as Migrant Protection Protocols as "a huge step forward in bringing order to chaotic migration flows, restoring the rule of law and the integrity of the United States immigration system." Bustle has reached out to DHS and ICE for comment.

However, some civil rights organizations disagree with that characterization. "Immigration authorities are forcing asylum seekers at the southern border of the United States to return to Mexico — to regions experiencing record levels of violence," the lawsuit reads. "By placing them in such danger, and under conditions that make if difficult if not impossible for them to prepare their cases, Defendants are depriving them of a meaningful opportunity to seek asylum."

In its statement, the ACLU rejected the administration's claims of an immigration crisis at the border.

Before the implementation of the new return policy, asylum-seekers would legally enter the country through a port of entry along the border, and remain in detention while they waited for a "credible fear" assessment. If they were approved, migrants could remain in the country until a future court hearing. However in 2018, CBS News reported, the Trump administration hit a record high in asylum denials, rejecting some 65 percent of applicants.

In a December statement, Nielsen described the "catch and return" policy as a way to prevent migrants trying to "game the system" by obtaining entry and then "disappear[ing] into the United States, where many skip their court dates." In fact, according to the Department of Justice's own data from the 2017 fiscal year, some 89 percent of asylum-seekers released into the country return for their court dates.

Under the new plan, CBS reported, migrants crossing at the San Ysidro checkpoint in San Diego, are processed and returned across the border to Tijuana with a toll-free phone number to check on their claim status. Immigration rights activists argue that this system defeats the purpose of an asylum claim for people trying to escape violence and political unrest in Central America.

"They're just spending their time just trying to survive in Tijuana," Aaron Reichlin-Melnick, an analyst for the American Immigration Council, told CBS. "We know that there are people who have been turned away from the border who have then been kidnapped, raped. There are likely people who have been murdered."