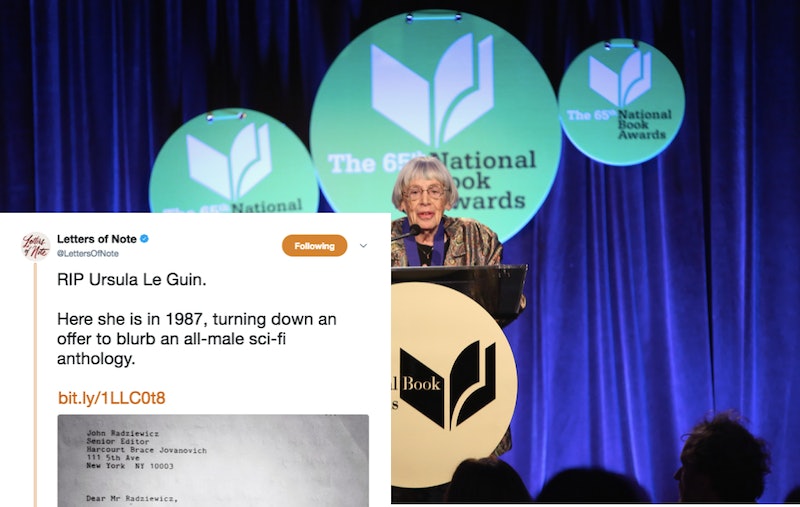 When it comes to fighting for female representation in literature, Ursula K. Le Guin was doing it long before it was cool. At least that's what this letter, penned by Le Guin to editor John Radziewicz in the late 1980s, has made abundantly clear. According to a post by Letters of Note, Le Guin was asked to supply a blurb for Synergy: New Science Fiction, Volume 1 in 1987, when she was already a multi-award winning author. The book was to be the first part in a four-part series of anthologies that would showcase sci-fi stories from both established and up-and-coming authors. Sounds great, right? Well, Synergy definitely stood out to Le Guin, but not for a good reason. It turned out that there was not a single female author included in the line-up.

Le Guin's letter in response to the blurb request reads, in part, "I cannot imagine myself blurbing the first of a new series and hence presumably exemplary of the series, which not only contains no writing by women, but the tone of which is so self-contentedly, exclusively male, like a club, or a locker room." Yeah, I feel like I should be searching for some vaseline for that burn even 30 years later. You can read the letter in its entirety below.

Of course, it can be hard for modern readers to remember a time when diversity in literature wasn't of the utmost importance. Especially since the advent of the We Need Diverse Books movement in 2014, readers, authors and other industry professionals have been rallying behind Own Voices and diverse books in astounding numbers. But when Le Guin first broke onto the sci-fi scene in the 1960s, and even when she clapped back in her 1987 letter, this simply wasn't the case. Which makes it even more spectacular that she put herself forth as a high-profile voice for women in publishing when so few would have done the same.

And she Le Guin definitely didn't stop there. Even as recently as December 2017, she penned an essay for her book No Time To Spare: Thinking About What Matters, entitled Who Cares About The Great American Novel?, in which she wrote, in part, "Only in this view of the writer as a fully privileged male, a warrior, literature as a tournament, greatness as the defeat of others, can the idea of ‘the’ great American novel exist."

Le Guin pulls no punches as she skewers the idea of "The Great American Novel" and what the phrase really means: male writers claiming the self-important moniker due to the confidence lended to them by the historical weight placed upon their work. Le Guin writes:

So as long as men need to “be reflected at twice their natural size,” a woman writer knows that open competition with them is dangerous. Even if she wants to write the, or a, great American novel, she’s unlikely to announce (as male writers do from time to time) that she plans to or has written it. And if she feels she deserves a Pulitzer or Booker or Nobel, or anyhow wouldn’t mind having one, she knows most literary awards are weighted so heavily in favor of men that the social efforts involved in most major awards, the networking and careful self-presentation, are a great expense for an unlikely return.

It's beyond gratifying to hear Le Guin, arguably one of the most successful and beloved authors of our time, not only talk openly about the harsh realities of being a woman in literature today, and at the same time disregard the utter ridiculousness of it, too.

"Who wants 'The' Great American Novel, anyhow? PR people," she writes. "People who believe that bestsellers are better than other books because they sell better than other books and that the prizewinning book is the best book because it won the prize...The hell with The Great American Novel. We have all the great novels we need right now—and right now some man or woman is writing a new one we won’t know we needed till we read it."

Clearly, Le Guin's legacy will extend far beyond the pages of her beloved fiction. And if you've been looking for a push to write without limits, well, she just gave it to you.