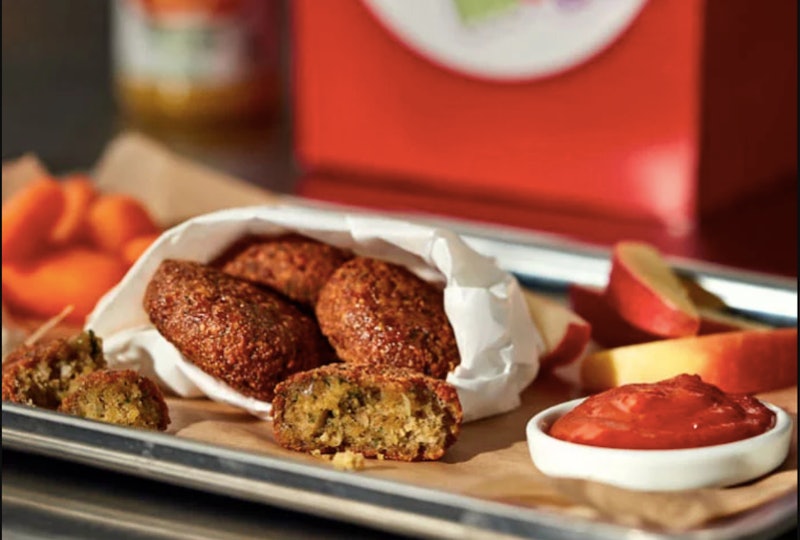 Happy Meals aren't just exclusive to chicken nugget fans. McDonald's iconic meal is now more inclusive than ever. McDonald's is going vegan with its first Happy Meal in Sweden. Because vegans deserve to be happy, too. It's not the first time the golden arches have added vegan items to the menu, and hopefully it won't be the last. Hopefully, because, unfortunately these extra friendly Happy Meals have — for the most part — only been available overseas.

While most U.S.-based McDonald's will have a hard time locating plant based burgers glowing on drive thru menus, they'll be in abundance just across the pond. Delish.com reports that Sweden's new vegan option will be the McFalafel. Customers can order the falafel pieces on their own or as a part of a bigger meal. The McFalafel is comprised of chickpeas and an herb seasoning. A pair that, if you've ever had falafel, you know to be harmonious.

The McFalafel will come with two options for dipping sauce — a yogurt sauce, which will render your meal vegetarian, or a vegan pepper dip. You know, just to stick with the theme and keep it vegan across the board. If you find yourself in Sweden and are struck with a Happy Meal craving, the McFalafel will be filled out with your choice of apples, carrots, or a small french fry and an accompanying drink. It certainly is a happy time to be a vegan as more options become more available around the globe.

This isn't the first time McDonald's catered to the needs of their dietary restricted customers. It was recently reported by VegNews that McDonald's UK spread the vegan joy across all their UK locations. VegNews writes, "The new meal features a wrap filled with shredded lettuce, ketchup, and meatless chicken fingers — made from yellow split peas, breadcrumbs, Arborio rice, dairy-free sundried tomato pesto, and red peppers." Beautiful how beans can mock meat — could this be a new tea time snack?

The UK Happy Meals are made completely vegan thanks to an option of carrot or pineapple sticks and a water or juice to wash it all down. The split pea meatless "chicken" fingers join the Spicy Veggie Wrap on the menu. But, disclaimer, they're both noted as vegetarian since they share the same toaster as McDonald's buns which include milk. If you keep to a strict vegan diet, be aware that these UK items are in the presence of animal based products.

If you're United States based and feeling a little left out with these menu changes, there is one vegetarian option you can find in the states. Perhaps it's time for a trip to Chicago. VegNews reported that the golden arches brought an international favorite to their headquarters in Illinois. The McAloo Tiki is a vegetarian option from locations in India. The vegan patty is made of potatoes, peas and seasoning. The McAloo Tiki is completed with tomato slices, red onion and eggless tomato mayo. However, the mayo does contain cream, so skip that to stick with vegan fare.

As for when more vegan and vegetarian options will stick to menus on the other side of the pond? The fast food haven is reportedly keeping an eye on plant based options.