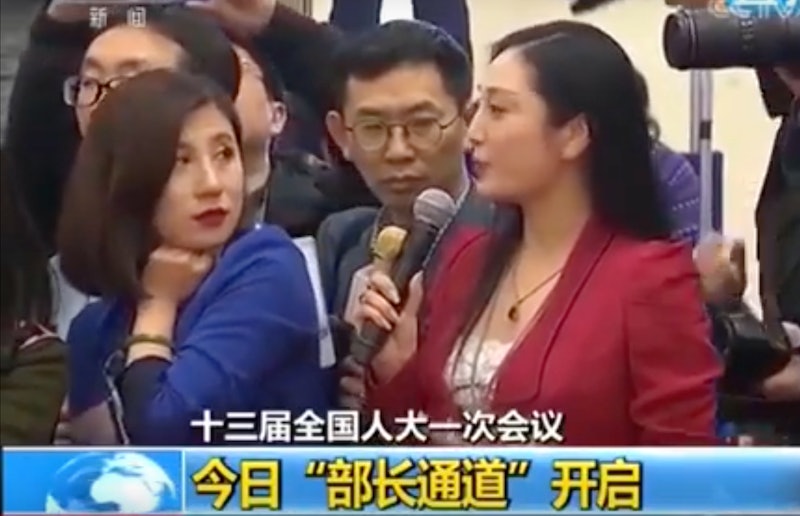 An epic eye roll is worth a thousand words. While pre-screened reporters lobbed flattering questions at officials following a meeting of China's legislature, one Chinese reporter's dramatic eye roll made it clear she didn't appreciate the pageantry. Video of Liang Xiangyi's unfiltered reaction took over the internet in China — and the government was not happy about it.

The questions that journalists ask at China's National People's Congress are pre-screened and sometimes scripted, meaning they tend to go easy on politicians. Video shows Liang, a journalist for the financial news site Yicai, looking around in disbelief as a journalist passed the 30-second mark of a question that praised China's economic reforms. As the fawning comments go on, Liang rolls her eyes so hard it requires the full force of her head. Liz Lemon would have been proud.

CCTV, the Chinese national news broadcaster, caught the eye roll on live TV, and the video of Liang's reaction quickly became a meme across China. The government immediately began deleting GIFs and other posts about the moment, though, and The New York Times reports that Liang's name became the most-censored term on the blogging site Weibo. TIME video producer Aria Hangyu Chen relayed on Twitter that Liang's name is no longer searchable on Weibo, either.

The journalist asking the long-winded question, Zhang Huijun, works for American Multimedia Television U.S.A. based out of Los Angeles. Though the name doesn't imply that the broadcaster would have Chinese interests, the Times reports that it previously partnered with state-run TV stations in China. The company's president also heads a Los Angeles Confucius Institute, a learning network sponsored by the Chinese government, according to his LinkedIn account.

It's possible Liang's reaction was more about the length of Zhang's question than its contents, but it was full of compliments about the government's economic reforms. Here's her entire question, as translated by the Times:

The transformation of the responsibility of supervision for state assets is a topic of universal concern. Therefore, as the director of the State-Owned Assets Supervision and Administration Commission of the State Council, what new moves will you make in 2018? This year marks the 40th anniversary of the Reform and Opening-up Policy, and our country is going to further extend its openness to foreign countries. With General Secretary of the Chinese Communist Party Xi proposing the One Belt One Road Initiative, state-owned enterprises have increased investment to countries along the route of One Belt One Road, so how can the overseas assets of state-owned enterprises be effectively supervised to prevent loss of assets? What mechanisms have we introduced so far, and what's the result of our supervision? Please summarize for us, thank you.

Censorship by the Chinese government is a common problem for journalists in the country. New York Times reporter Chris Buckley articulated what it means in a plea for fellow journalists to not play into the National People's Congress' expected propaganda.

"My prayer for this NPC: Please reporters stop the game of negotiating to ask tame questions, including at the premier's news conference," he tweeted earlier this month. "There are profound issues before this congress, and a charade of accountability will do nobody any good and does us discredit."

The attention paid to the eye roll did overshadow the political decisions that came out of China's National People's Congress, but it also highlighted what types of questions journalists are allowed to ask Chinese officials. Other vital news from the congress was the legislators' decision to eliminate term limits for the president, allowing Chinese President Xi Jinping to now lead indefinitely.

Whether the video was seen as a powerful comment about Chinese censorship or simply a hilarious distraction, people loved it. Some even recreated the viral moment. A powerful eye roll resonates with everyone.