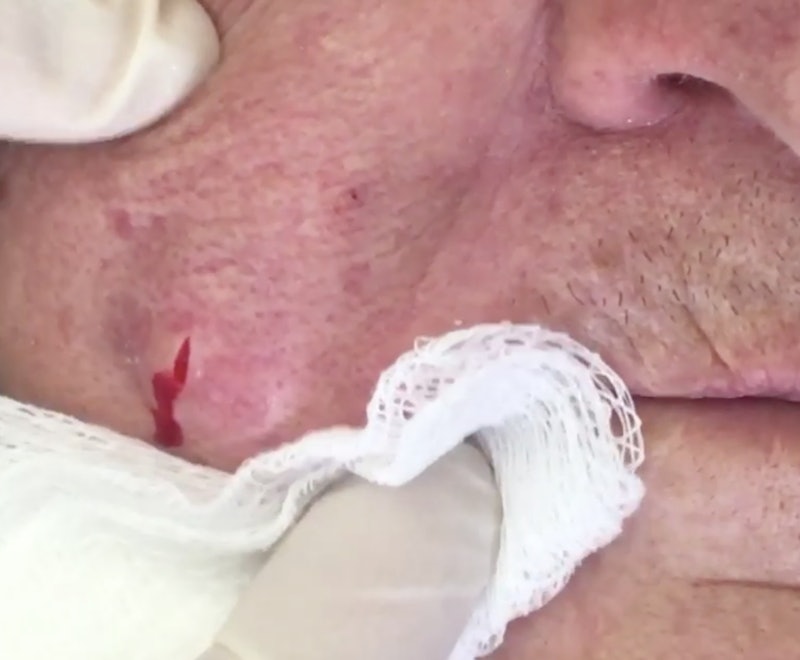 Gather round for the latest installment of the ever popular Pimple Popping Theater. In case you haven't heard (but I'm sure you have, because you're here reading this article), the internet is absolutely enamored by the satisfying burst of a plump-with-pus pimple — so much so that videos of massive pimples being popped go viral in pretty much an instant. And now, we have another, courtesy of California-based Dr. Zit Zapper: A video of a cheek abscess being drained and subsequently exploding like a pus-filled firework on the Fourth of July. It's important to note before diving in that the pimple/abscess/cyst-popping community isn't for everyone, so the below video should only be viewed if you can stomach the most geyser-like pus explosion.

We all get pimples. We all have pimples. We all know that there's little that's more satisfying squeezing a pimple off your body. And that process, more often than not, starts with a pop. As pus floods out of your pimple, relief sets in. That's what it's all about. The build up and tension of a bulbous breakout begging to be disturbed and prodded. The suspense and thrill of it on the cusp of exploding. And for the finale, the satisfying flow of pus excreting from the blemish. Every pimple, cyst, or abscess-popping video is a triumphant story with an attention grabbing arc — in watching it, we feel the same satisfying feeling we do when we're popping our own pimples.

This video is no different, and the arc is a bit... explosive.

If pimple popping videos could be nominated for an Academy Award, Dr. Zit Zapper would be nominated for a golden statue for his work here. A video of an abscess being popped was published on Instagram on Nov. 20 of last year but it resurfaced on Reddit on Feb. 15. Reactions have mostly been a consistent approval: "Sooooooo goooooodddd!" is what Reddit user sarahhallway exclaims. illneverforget2015 says of the video, "Glorious!"

In case you can't stomach a shot for shot detailing of the popping, or even bring yourself to watch it, it can be generalized in a few words: A doctor pops what they identify to be an abscess, according to the Instagram caption, by making an incision and applying pressure with their fingers. From there a fountain of pus erupts, garnering the abscess pop video the aforementioned praise from Reddit.

An abscess, according to MedlinePlus, "is a pocket of pus. You can get an abscess almost anywhere in your body. When an area of your body becomes infected, your body's immune system tries to fight the infection. White blood cells go to the infected area, collect within the damaged tissue, and cause inflammation. During this process, pus forms." Further elaboration explains, "Bacteria, viruses, parasites and swallowed objects can all lead to abscesses. Skin abscesses are easy to detect. They are red, raised and painful." If you think you have one, head to the doctor to get it checked out before looking for social media stardom!

Steven E. Hodgkin, MD, FAAD, DABD, FASMS, is apparently the dermatologist behind the video though the Instagram handle @drzitzapper is not verified. His practices are in California, so maybe it isn't too late for the Academy to add a pimple popping internet video category to the 2018 Academy Awards broadcast. Dr. Zit Zapper could possibly make it to the show even with such late notice.

If you're one who is all about those satisfying flings of pus across a room for a single pop, then snuggle in front of your computer with a bag of popcorn. The subreddit /r/popping/ offers a marathon of satisfying content, including the now, probably infamous video of this popping abscess. Enjoy the exciting and epic play by play of this messy event over and over if you so please. There's a wide audience on the internet already and you never know when a sequel will be posted.