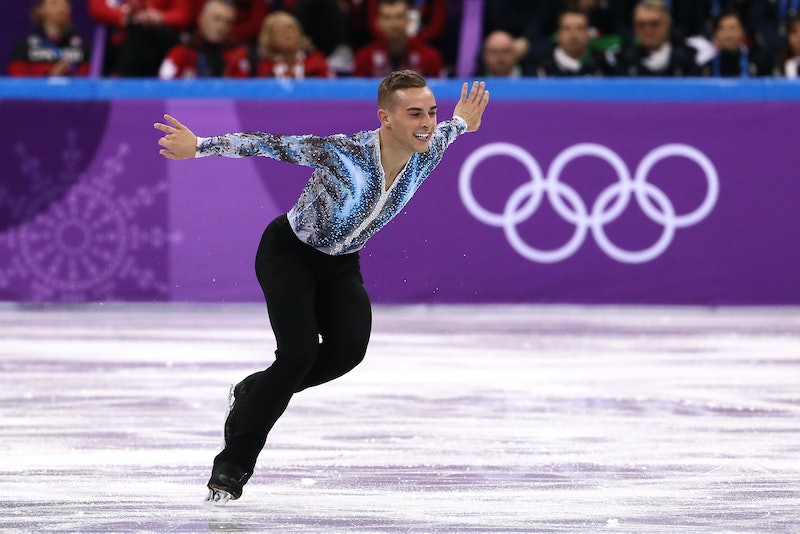 On Sunday night, United States figure skater Adam Rippon stole the show during the men's free skate competition. Capturing the attention of fans across the both the country and the world, Rippon twirled and jumped and glided his way into a certifiably flawless performance that landed him in third place.

Twitter, of course, was quick to jump on the praise-giving bandwagon. Users erupted into cheers both during and after Rippon's stellar performance. Additionally, many were quick to express frustration that Rippon didn't earn top scores in the event.

"Adam Rippon was perfect and gets third, two dudes fall and they're in third. All I'm asking is HOW!?!?!?" tweeted user Mason Pena. Many others echoed similar sentiments. "Russia already won the U.S. election give Adam Rippon his gold medal," tweeted writer and podcast host Ira Madison III.

Many viewers believed that Rippon was not awarded top points because of the lack of technical difficulty in his routine. Particularly, he refrained from attempting any quads — a skating jump with four complete turns. So, while the two skaters who placed ahead of him did, in fact, fall, their routines were inherently more technically challenging, which likely hurt Rippon's overall score.

In a post-performance interview with NBC, Rippon expressed his determination to compete well, and also said that he was proud of his performance. "I want to be one of the first medals here at the Games, and we have a great team," he said. "I'm so proud to be on this team. You know, I went out there and I did my job so I'm going to be cheering with the rest of my teammates today."

When asked if the experience has been all that it's chalked up to be, Rippon responded that it was, and cheekily suggested that viewers should stop by the Games sometime, if they ever had a chance.

"It's like pretty awesome," he said. "I highly recommend it, if you ever have the option, like, come to the Olympics. It's [a] fun time. And you know, today was just so special, so fun."

According to The Washington Post, Rippon is the oldest first-time figure skating Olympian in nearly 100 years. But that's not all he's become known for. The 28 year-old athlete made headlines in the weeks leading up to PyeongChang for sparring in the press with Vice President Mike Pence. In an interview with USA Today, Rippon expressed contempt toward Pence, who had been chosen to lead Team U.S.A. into the opening ceremony.

When he was asked his thoughts on Pence's position, Rippon, who is openly gay, responded, "You mean Mike Pence, the same Mike Pence that funded gay conversion therapy? I’m not buying it." (Press Secretary Alyssa Farah said that the "accusation is totally false and has no basis in fact.")

In his comments, Rippon was referencing a piece of Pence's 2000 congressional campaign website, which many have interpreted as a piece of support for sexual orientation changing therapy. The website reportedly said that, "resources should be directed toward those institutions which provide assistance to those seeking to change their sexual behavior." While this was repeatedly brought up during the 2016 presidential campaign, the precise meaning behind the statement remains unclear.

Pence directly responded to Rippon's interview comments, tweeting on Feb. 8, ".@Adaripp I want you to know we are FOR YOU. Don’t let fake news distract you. I am proud of you and ALL OF OUR GREAT athletes and my only hope for you and all of #TeamUSA is to bring home the gold. Go get ‘em!"

But, even beyond political headlines, Rippon has clearly captured the hearts of his fans. Between his beautiful skating routines and his gregarious personality, expect to see and hear a lot more from him as the Games continue.