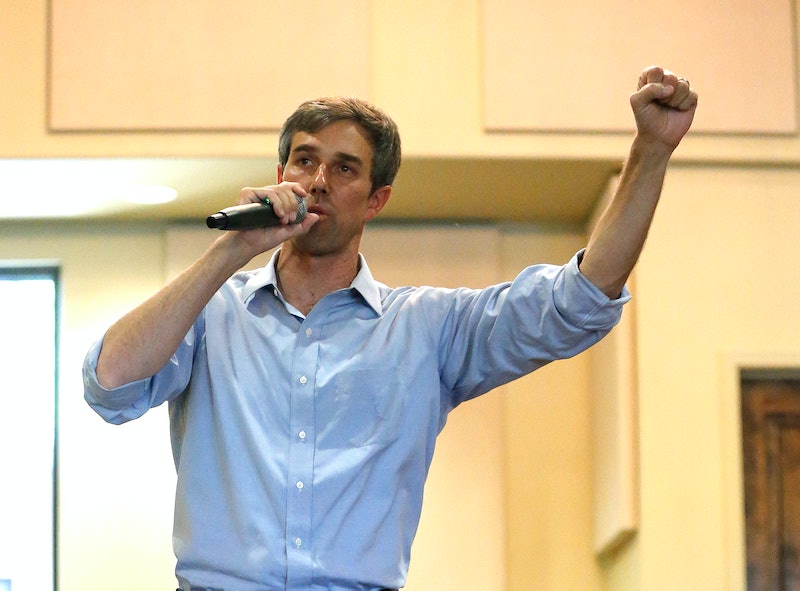 In a movie-worthy moment that has since gone viral, video of Beto O'Rourke supporting NFL players' right to kneel during the anthem sums up the argument in favor of peaceful protest. The best part about the video was O'Rourke's callbacks to all of the ways peaceful protests have been used to move this country forward. In fact, O'Rourke is so fully supportive of NFL players' right to take a knee during the national anthem that he told a crowd of people he "couldn't think of anything more American."

The speech initially came about as a response to a question asked during one of O'Rourke's recent town halls. When a man told O'Rourke that he personally was frustrated by the players who opted to kneel, O'Rourke replied that he understood that frustration, but that he disagreed.

Somebody mentioned reading [a book on Martin Luther King Jr.] , and when you read that book and find out what Dr. King and this nonviolent, peaceful movement to secure civil rights for their fellow Americans...those who were beaten within an inch of their life crossing the Edmund Pettus Bridge in Selma, Alabama, with John Lewis...in the same country where their fathers may have bled the same blood on the battlefields...anywhere that anyone ever served this country.

The freedoms that we have were purchased not just by those in uniform...but also by those who took their lives into their hands riding those Greyhound buses, the freedom riders...who knew full well that they would be arrested...peaceful, nonviolent protesting, including taking a knee at a football game to point out that black men, unarmed, black teenagers, unarmed, and black children, unarmed, are being killed at a frightening level right now, including by members of law enforcement, without accountability and without justice.

[The players] are frustrated, frankly, with people like me and those in positions of public trust and power, who have been unable to resolve this or bring justice for what has been done and to stop it from continuing to happen in this country...That is why they are doing it. And I can think of nothing more American than to peacefully stand up, or take a knee, for your rights, any time, anywhere, in any place.

The video has reached audiences far and wide, with Ellen Degeneres tweeting the video and captioning it, "I would like to meet you, @BetoORourke."

O'Rourke, a Democrat, has been running what has been described as a "suicide mission" against incumbent tea-party Republican Ted Cruz for his Senate seat. He is now within four points of Cruz in current polling. Though polling is often inaccurate and not necessarily wholly representative of the full picture of a political race, it's clear that O'Rourke has slowly began to take space into the mainstream. People have even begun to make references to O'Rourke as an Obama-esque figure.

One Twitter user was so blown away by O'Rourke's support of NFL players that he tweeted, "One day we're going to look back at these remarks from Beto O'Rourke the same way we do at Obama's 2004 DNC speech."

O'Rourke will take on Cruz in a series of televised debates leading up to the 2018 midterms, starting on August 31.