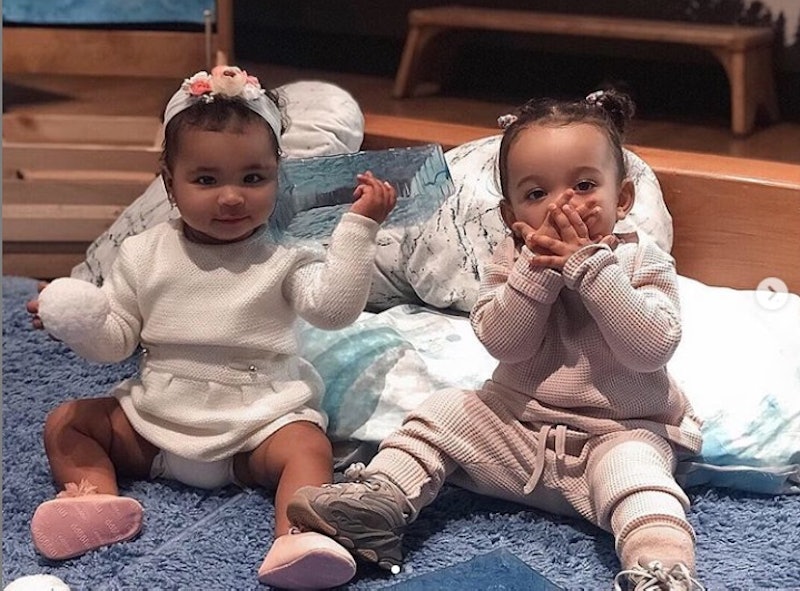 Chicago West is following in her mom's footsteps when it comes to fashion — literally. Kim Kardashian West posted a video of her daughter on Instagram Stories, and in it Chicago West walked in heels. Barely one year old, the toddler has some serious stride when wearing stilettos, taking after her fashion-loving mother.

Kardashian West captured a video of Chicago toddling around in a pair of her neon PVC pumps, which look to be around four inches tall. Chicago clomped around the room with perfect balance, before heading over to the couch where a matching purse was waiting to complete her outfit. But knowing Kardashian West's penchant for designer items, this wasn't going to be your run of the mill mall handbag. The yellow structured bag that caught Chicago's eye was a Hermès Kelly Mini. Kardashian West handed her daughter the bag, encouraging Chicago's vintage eye.

Chicago wanted to take a peek in what was inside mom's purse, and after she was satisfied to see it was empty except for the optional cross body strap, she clomped across the room once more before the video ended. For someone who just celebrated her first birthday in January, Chicago has a natural talent when it comes to walking in pumps.

Kardashian West is known her collector's vintage designer vault that she plans to leave to her daughter, North West, so it's no surprise that Chicago picked up a vintage Kelly Mini.

In fact, this year alone Kardashian West has upped her game when it came to wearing collections that have debuted decades ago. When arriving in Paris at the end of Paris Fashion Week on March 5, Kardashian West wore two catsuits back-to-back. The pieces came from French designer Azzedine Alaia's fall 1991 ready-to-wear collection.

Rewind a month prior, and the beauty mogul was also spotted wearing two vintage Thierry Mugler pieces for the “Thierry Mugler: Couturissime” exhibition in Montreal. One dress was from the Fall 1999 Couture collection and the other was from Spring 1994.

Suffice it to say, there must be a lot of vintage fashion pieces lying around the house for Chicago to play with. But toddling over to the Kelly Mini shows that Chicago has exceptional taste.

The Kelly Mini II came out in 2016, and it was a re-imagination of Hermès' classic Kelly bag, which debuted in 1930. The purse got its name after Grace Kelly famously used it to hide her growing baby bump from photographers in the 1950s. But since the mid-century, the purse has gotten inventive tweaks throughout the decades. The brand has experimented with different color palettes, artist collaborations, and sizes. And the Kelly Mini was made to keep up with the changing times. It was big enough just to fit your smart phone and a tube of lipstick.

The Mini II came in a line of energetic colors, from saffron yellow (which Kardashian West owns) to coral pink to sky blue. And it comes with an equally impressive price tag. One tiny bag costs $7,700.

Told you Chicago has good taste.